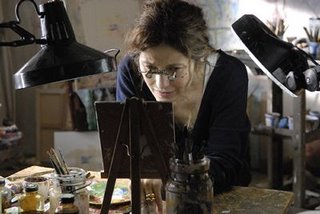 William Horberg, exec producer of Charlie Kaufman’s Synecdoche, New York, has a blog, and in today’s post he compares his first reading of Kaufman’s script — in one of those annoying “you have to read this in two hours and then hand back immediately to a bonded messenger” sittings — to his first assignment at script coverage back in 1986. (Hat tip: Ted Hope.)

As a test, the first screenplay I was given to read and analyze as a sample of my reading, writing and comprehension was, believe it or not, How To Get Ahead In Advertising, which became the second film from British writer-director Bruce Robinson after his seminal debut, that cult classic and one of my all-time favorites, Withnail and I.

For those of you who haven’t seen this small British indie starring Richard E. Grant, the story centers around a harried advertising executive who grows a painful boil on his shoulder that surreally erupts into a second antagonistic head and split personality, to blackly comic results. Other than a period where I was obsessed with the Russian novelist Nikolai Gogol, I had never read anything like it, and it was the last thing I expected to find upon my arrival in Hollywood.

I spent the weekend in agony. I felt I was being “gaslit” on my first job interview. If I were to confess that I loved it, would I be deemed to have hopelessly uncommercial taste. If I were to give it a negative report, would I be complicit in the studio turning down one of my favorite directors? The script felt like a Rorschach test designed to ferret out my emerging film personality.

Twenty-two years later, here I was reading one of the most wildly imaginative, deeply personal, and seductively subversive scripts I had read since Bruce Robinson’s classic, and having the same schizophrenic experience of head and heart in conflict. Later, I was to discover that the name of Kaufman’s loan-out corporation for his writing and directing services was auspiciously titled “Projective Testing Inc.”, projective testing being the name of the whole field of psychology in which a subject is presented ambiguous stimuli to yield hidden levels of personality.

I understand Horberg’s point on two levels. First, like him, my first job in film was reading scripts. I remember picking up the two “test screenplays” I was to read from New Line Cinema’s old offices on 8th Avenue near Port Authority. One was conventional and pretty boring with a hackneyed “high concept.” The other was more original and nutty. I spent the weekend wondering how much I should second guess myself and attempt to figure out the mindset of the development execs at the company. Finally, I just decided to say what I thought — which, initially, was wrong. The screenplay I panned was in active development; the one I liked had been passed on. (Six months later, however, I got a call back. The “active development” script was put in turnaround and would I like to read scripts for them.)

I guess Synechdoche, New York played a similar mind game on me — not while watching the movie, but while editing the fascinating, funny, probing and spirited interview we have with Kaufman coming up in the magazine. (It’s in the print issue and will be online, probably by the end of the week or early next at the latest.) Our director Q and A’s are pretty heavily edited. In real life, people talk in fragments and non sequiturs. They leave holes in their conversation that are filled in with dramatic inflection or assumed meanings shared with the person they are having conversations with. These things must all be dealt with through editing so that the reader both understands what’s being said but also so that the finished conversation can exist as an informative work of prose. When it comes to my style of editing, when faced with a long transcript — and James Ponsoldt’s interview with Kaufman was a long transcript — I tend to concentrate on what I find most interesting, assuming that the reader will also find this interesting. Questions that lead to conventional answers I tend to cut out in favor of more unexpected replies or things I haven’t heard this artist say before. I also like our interviews to read as interesting and informative for those who haven’t seen the movie, or who may never see the movie. So, I guess, I worry a bit about answers like this one:

There’s a sameness to our lives. There’s a continuum we’re all on: you are born, there are events there are sadnesses, there are frustrations, there’s happiness, there’s illness, there’s loss, and there’s death. I think understanding that there is that continuum is more important than reflecting on the specifics of your life. There is this correlation between Caden’s life and Ellen’s life, between his unhappiness and her unhappiness, between his loss of his daughter and her not ever having her daughter, between all those elements to the point where [Caden and Ellen] become the same person at the end of the movie. He apologizes to the actress who plays her mother for disappointing her and is in the process getting comfort and being told by this person who isn’t his mother that she’s so proud of him, and this gives him inspiration to move forward, and he gets a new idea for how he’s going to do his play. It’s actually his first new idea since Hazal dies, and it never gets realized.

So please see the movie this weekend — it will make reading the interview in Filmmaker a lot better!

Related: in Variety‘s “The Circuit,” Mike Jones points to an exhibition in L.A. of the 27 “micro-paintings” found in Synecdoche, New York which are created by Catherine Keener’s character, Adele Lack. The show runs October 21-26 at The Montalbán Gallery, 1615 Vine Street, Hollywood, CA 90028.