Robert Greene, Fake It So Real 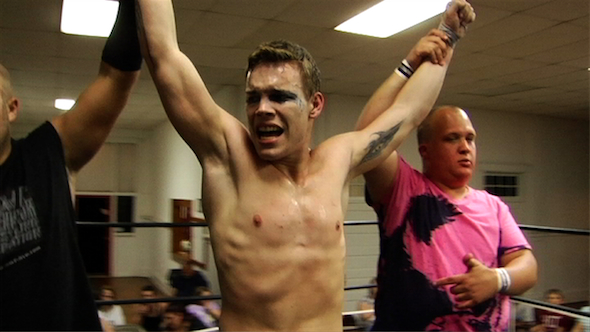 by Brandon Harris
in Director Interviews
on Jan 11, 2012

Big-time professional wrestling has long been a lucrative business, but for the men of Lincolnton, North Carolina’s Millenium Wrestling Federation, the social cohesion and outlet for their imagination the sport provides is their primary compensation. As chronicled in director Robert Greene’s fantastic new documentary Fake It So Real, wrestling has never seemed as intense and physically costly. Yet Greene is not interested in mining the sport for tales of snake-bitten men reaching for a glory that will never come; this isn’t a doc version of The Wrestler. Woebegone men are few and far between in this world, despite the fact that Lincolnton seemingly doesn’t provide much in terms of career prospects. A sense of community and mutually-appreciated craft pervades the scene.

Fake It So Real is Greene’s second festival hit in as many years. His debut film Kati with an I was nominated for the Gotham Award’s Best Film Not Playing at a Theater Near You in 2010 after premiering at the True/False Film Festival. Fake It So Real premiered there in 2011 before going on to play many of the circuit’s most well-regarded doc and regional fests, including Sarasota and CPH:DOX. The film opens this coming Friday at Brooklyn’s ReRun Gastropub Theater.

Filmmaker: Did your interest in wrestling, like so many adult males in their twenties and thirties, begin in your childhood in the ’80s, as the popularity of the sport was expanding?

Greene: I am a huge wrestling fan through and through. I was born in ’76. My dad still calls it “wrasslin.'” He still wants to think about it as being real! I’m a wrestling nerd. I surf websites about wrestling. The first wrestling I recall watching was Wrestlemania II, because of the whole Mr. T appearance; I was somehow AWOL during Wrestlemania III, which featured the famous match between Andre the Giant and Hulk Hogan. For Wrestlemania IV, V and on and on, I was hooked. I was a huge Ultimate Warrior fan. My enthusiasm dropped off as the ’90s wore on. I knew about the great Bret Hart/Sean Michael matches, but I wasn’t religiously following it as I had been. Like a lot of people, I rediscovered it in college, right about the time Steve Austin got really popular and the Hart/Michael rivalry was still going on. My dueling passions have always been documentary film and wrestling, so I always wanted them to join somewhere along the way. After we were able to make Kati with and I relatively cheaply with a structure that made sense, I jumped into trying to make this one happen. 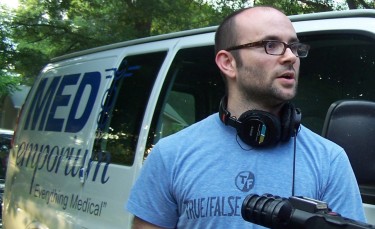 Filmmaker: How did you settle on the Millenium Wrestling Federation in Lincolnton, North Carolina to chronicle the world of small-time professional wrestling?

Greene: I’ve often joked, “If you don’t have any money, you go film your family.” [laughs] Chris Solar is my cousin. As you find out in the movie, Chris was born with his intestines on the outside of his body, so he doesn’t have a belly button. He’s maybe eight years younger than I am. I was the oldest of all of our cousins. As we were growing up, I didn’t see him that often, but when I was fourteen and fifteen, I had a couple of cousins his age and we would rough house together, but we could never rough house with Chris because he was so fragile. We figured he would never end up doing anything physical.

Funny thing, he became a huge wrestling fan and we became closer as we got older, talking on the phone about wrestling. Then later on, he said, “I’m going to try and be a wrestler,” when he was about eighteen or something. He was super skinny. I just assumed he was going to die basically. I told his as much. I talked to him years ago, before I’d done my first film, about trying to do something. I’m glad I didn’t make the film then, because I wouldn’t have known what to do. It was an inspiring story for me, that he went from a kid who was kind of fragile and didn’t have a belly button to someone who was a referee in a tiny federation to eventually being a champion and one of their best characters.

I didn’t want to do anything that was like, “Backyard Wrestling Federation!” I wasn’t interested in making a film about violence necessarily. Like one character says in the movie, I do genuinely believe that it is a great American art form. One thing I like about Millenium Wrestling Federation in Lincolnton is that you see the mechanics of the art form very clearly. They’re doing it at such a basic level and they’re doing it for such an engaged group of people, you can see how everything they are doing is playing out for the audience with great specificity.

Filmmaker: Tell me about working with Sean Williams, who also shot your previous film and is known for his low-fi, verite style. I know he’s a student of Albert Maysles, the acknowledged master of the verite form, for quite some time.

Greene: Sean hired me to work at Kim’s Video with him a decade ago. He’s one of my best friends. We shot most of this movie in a week, although we picked up some stuff later. There’s only one person I would do that with. Not just because he can pick up a camera and with his way of seeing almost immediately find something beautiful, but also because when we work together, its way more of a collaborative thing. I think anyone who works with Sean will tell you that. He brings a way of thinking about movies to whatever project he’s working on. It’s not just about him knowing how to operate the camera. He has this great thing to say about Al Maysles, which is that Al was always in the right place. He’s seen so much footage of Al’s because for a long time he was an archivist for Maysles Films. He’s right. Al always knew exactly where to stand, exactly where to be, to get everything he needed. Sean has that, but he also has this other quality, this cynicism, that makes you step your game up and work harder to make sure you’re doing your part as the director and eventual editor.

Filmmaker: Were there elements of his world you wanted to include in the film, but for whatever reason you weren’t able to?

Greene: There were a couple things. We made Kati with 14 hours of footage, which is insane. That includes the older stuff of her as a kid. I knew I wasn’t going to be able to do that again. Still, I liked the idea of keeping the footage down because we didn’t have that much time to make the movie. We shot 40 hours of footage or so on this film, which is still not very much. The cut that had pretty much everything I’d ever want to have in it was only two-and-a-half hours long. There is a scene where Chris and his girlfriend go shopping at a thrift store for glittery things. It’s kind of funny, him looking for glittery scarves to wear for his match. The father David Hayes, the leader of the cult family or whatever, what you see at the end of the credits is actually his last match. The drama of it being his last match was the biggest thing that was taken out of the film. How he was gonna do it, what it meant to his wife, it was all in there. We took it out mainly because we wanted to keep the focused on the week we were chronicling, Gabe’s story, Chris’ story, Outlaw returning, the beard story, so we had to lose that bigger arc.

Filmmaker: I think the film really nails how important a social outlet for these men the MWF represents, especially in what seem like pretty bleak economic times in their community.

Greene: I think you’re right. I grew up maybe an hour away. There’s this thing about being idle and bored. It’s a place where people steal cars and run them into ditches for no apparent reason. [laughs] You just don’t have much to do. These guys frequent bars often, you see that in the movie. Most of them are family guys, they do their job, they go home, they hang out with their family or their friends, but there isn’t much going on. It’s not just that though, it’s that if you want to do this, it is sort of all consuming.

All the towns these guys come from are boring as all hell, so they put everything they have into their wrestling. I’ve shown the film to so many filmmakers who have said, “I didn’t know I’d see so much of myself in these men!” Any filmmaker you talk to, you’ll see that he or she is just totally immersed in watching films, talking about movies, looking at movie posters, whatever. The reason why they do it for free and put their bodies through what they do is that they can’t help themselves. It’s their passion. That sort of purity of purpose is pretty inspiring to people, I think. It’s very clear that this is what fills up their lives, aside from the tasks they have to do like work and feed their kids. Wrestling is what feeds their soul. That’s what they want to do all the time.

Filmmaker: How did the subjects react to the movie when they saw it?

Greene: I showed them a long version, like a two-hour cut, the day after Thanksgiving, last year. I went back to Charlotte, near where everybody is, and we rented out a little screening space. Everybody was drinking beer and stuff. I watched the movie with them. I was super nervous. They were all there, with their girlfriends, buddies and families. It was a massive amount of people packed into a very small space. They laughed through the entire thing. They were missing lines because they were uproariously laughing at everything. When it got more serious, it got very quiet and someone would make a joke to break the tension; it was them watching serious stuff about their own lives after all.

At the end, I get up and say thanks to everybody and we all had this emotional outpouring which was totally unexpected. Maybe it was because they were drunk. [laughs] They each gave speeches where they talked about how much they meant to each other, how this is going to be the beginning of something more for them, and how even if it’s not, that the movie sort of justified what they were doing, if just by it being a real document of what they do that doesn’t try to make them look stupid, that respects what it is they go through. It was a really amazing moment and a real honor to feel like they would look back on this film as something that meant so much to them, that justified what they were, that told the side of the story that never gets told. That night was pretty extraordinary. I don’t think any other reaction to the film will ever top that.