MARK GILL ON THE FUTURE OF THE THEATRICAL BIZ 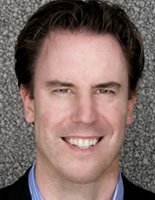 In what is something like an appendix to his famous “The Sky is Falling” L.A. Film Festival keynote speech, Film Department head Mark Gill is the guest on this week’s issue of the “The Business” film podcast. Gill’s segment is called “Mini-Majors, Endangered Species?”, and in it he discusses the independent film theatrical business in the wake of this year’s specialty label shrinkage. Like everyone, Gill wags his finger at overproduction but then he extends the argument to its logical end result — fewer movies in theaters. And that he likes.

“The first and the best news is that there will be far fewer movies in theaters. It will go from probably 600 movies a year down to about 300 movies per year, which is where it should be. That’s really good news, because a lot of the movies on the margin will not get made. The second thing is that it also means to the extent that you are thinking about going to a film on the weekend you don’t have to choose from 12, you have to choose from six. And one of those is probably for teenage girls, and another one of those is the action movie you don’t want to see, and all of sudden you’ve narrowed it down to three or four. And one of those is a tiny little art film you don’t care about and, okay, you’ve got a couple of choices this weekend, as opposed to now, when you look at the internet or the paper for showtimes and there are twelve movies to sift through. It’s untenable, and that will not last. That’s going to be gone within a year.”

Yes, we don’t need our theaters clogged up every week with artistically interchangeable films just angling for their three-word NY Times pull quote on their way to a video release. But those titles are different than the truly diverse and unique films that swing for the artistic fences or which are directed to audiences not served by the tastes and production paradigms embraced by the studios and mini-majors.

Elsewhere in the interview Gill remembers a time when a few million dollar gross was considered okay. Now, he says, a film that grosses $5 million is a “near miss.” That quote made me think about something Ted Hope says in the current conversation on the future of the independent film business model in this issue of Filmmaker. “Hopefully we can return to a much more modest [business], like looking at films that set a goal of $5 million U.S. box office,” Hope said. I agree — rather than abandon films that are never going to convince more than 600,000 or 700,000 to see them in their theatrical run, new players need to emerge that, like Sony Pictures Classics, can scale marketing expenses accordingly and run comfortably on such grosses.

It may be that Darwinian market forces will cull the weaker businesses, leaving the overall market stronger. Over-production has been an issue for film for some years, even if the industry is still shy about using the term. But the economics of the middle ground have always been fragile. The reason this area of the sector has attracted such big personalities is that it requires a mental strength and vision to drive through success.

The industry is in danger of losing the ties that bind the blockbusters to the YouTubers. A long tail and a giant head do not make for a healthy film industry. Film needs its middle ground.

Also on this week’s episode of “The Business”: an interview with Sundance’s John Cooper and Trevor Groth on the grueling job of watching those 9,000 yearly submissions. To hear it as well as Gill, visit “The Business” at the link above, subscribe through iTunes, or listen to it here on this blog through the embedded player, below.