The second film in the “Best Film Not Playing at a Theater Near You” series this year is Tom Quinn’s Slamdance Grand-Prize-winning The New Year Parade. I asked him the same question I asked filmmaker Nina Paley, below, and here is his answer. The film screens Friday at 6pm and Sunday at 1:30pm at MOMA.

While I don’t consider myself a political filmmaker, I think it’s amazing when storytellers capture the time they live in. Whether it be the invasion of Prague in ’68, Charles Burnett capturing Watts in ’77, or a home video of Christmas in ’86, there is power and beauty in freezing the textures of reality before they fade; in creating a record that these moments really did happen and these people really did live them.

Nuance is lost with time, and increasingly, in the moment. We use broad strokes these days: red, blue, liberal, conservative, white collar, working-class, black, and white – each has an opposing label, an enemy by design. Yet most of us are confused and searching for the same things in our daily lives: a sense of safety, belonging, purpose, righteousness, love. Beyond all of these labels is a lot of nuance, and contradiction. 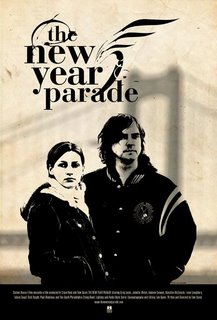 Similarly, The New Year Parade was born from the feeling that divorce was often depicted in broad terms. It is a social problem we consider “dealt with” and yet many of my friends were finding themselves struggling with new issues as they built meaningful relationships and neared marriage. Although they were facing similar fears and insecurities (regardless of whether they were five months or twenty-five years old when their parents divorced), no one was talking to each other. The New Year Parade began an attempt to capture and explore the concerns of my friends. As we made the film, it became clear that the story was not about divorce, but rather family – the things we look for and need from each other, and how they work and sometimes don’t. Because we did not have financial resources, we had to build relationships to get the film made – with the cast and crew, The South Philadelphia String Band, and the entire Mummers Community. It was the most rewarding process I’ve ever been part of.

If the sky is momentarily drooping for large-scale independent film production and distribution, I find that liberating. The lack of money could encourage a boom in regional voices around the country and a new sense of self-reliance and independence. The tools are available and this generation is primed. I remember attending a panel on digital filmmaking in 1999 where many of the older audience members were aghast by the notion that video was becoming a viable competitor for film. A friend of mine was looking around, confused. “I don’t get it,” he said, “I’ve been shooting my movies on video since I was a kid. I assumed I always would.”

Regardless of budget, I look forward to shaping my voice. I hope to continue working with dedicated actors and nonactors and a modest, but loyal crew, to capture the people, places, and experiences I care about. Taking The New Year Parade around the country has taught me that audiences value performance over “names,” story over “production value,” and subtlety over pandering. This experience – beginning at the IFP Narrative Rough Cut Lab, continuing through an amazing festival run that started with Slamdance, incredible reviews, and now this wonderful Gotham Awards nomination – has given me new confidence and ambition as I head toward the next project. I am grateful for it all and thank everyone for their support.