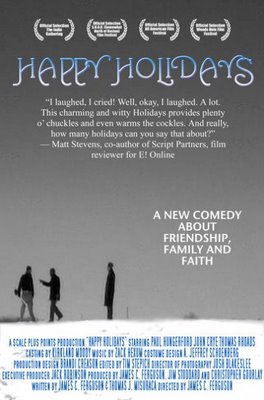 In the New World of independent film distribution, filmmakers everywhere are having to adjust and rethink their release plans, throwing away old concepts like shepherding their film through an orderly tiered set of windows. One director, James C. Ferguson, is releasing his film in a number of different ways all around the holiday season. Appropriately, his film is called Happy Holidays and it’s described as a “small, Woody Allen-y, people-in-rooms-talking film about tolerance.”

Ferguson described his journey in an email to the blog:

Like so many filmmakers before me, HAPPY HOLIDAYS arose from the ashes of another failed project. We had optioned the rights to the Richard Yates short story BUILDERS and spent a year and a half trying to get that film going, unsuccessfully (Please don’t talk to me about REVOLUTIONARY ROAD.) We hadn’t raised enough money to shoot the 1 to 3 million dollar project. But we were able to cobble together enough interest and assistance to shoot (barely) a small, micro-budget, people-in-rooms-talking, black-and-white, Woody Allen-esque comedy about tolerance.

We shot the film for under $ 200,000 in 14 days (10 days in Los Angeles and 4 days in Rhode Island) in the spring of 2006. Post took, as it always does, forever. (I’m still not quite entirely sure we’re finished.) I knew it was a high risk endeavor all the way around but the film was so personal, I knew it was going to be such a labor of love, we just had to roll the dice. In the back of my head, I always (niavely) thought if we could get it up in front of an audience, the right audience, it might have a chance. And now that the film is getting out there, we do seem to be finding a modicum of success. I, personally, think Josh Blakeslee’s photography is beautiful (shows what 10 years of working for Roger Deakins will do for you). And I’ve known most of the cast for years and I just think they’re all great. (Why go with no-name actors? Well … I was lucky enough to be invited to a screening of STARK RAVING MAD a few years ago, before that film was released, and in that screening, in front of that audience of I-don’t-know-how-many-hundred people both Paul Hungerford and John Crye killed. The audience loved them. They’re my friends so I was rooting for them. But it was at that moment that I said, “I have to work with these guys … before we all get too old!”)

The internet really wasn’t part of our release stragety when we began all this back in 2006. But it sure is now. I’d love to tell you we have a far-reaching plan, but with different companies announcing different deals each and every day, at this point, we’re really just trying to keep up.

Happy Holidays screens this Saturday at 7pm at NYU’s Cantor Film Center and December 13 at 8 at the Boston Court Performing Arts Center in Pasadena. Other upcoming screenings will be noted on the film’s Facebook page. Ferguson also reports that Nelson Madison Films’ Linda Nelson, “has secured distribution for us on numerous online/VOD platforms, including iTunes (‘sometime before the holidays’). Currently, we’re available on Indiepix, Caachi and Eyesoda. At some point in the not-too-distant future, we will also be available on CinemaNow, Jaman, B-side, Amazon On Demand and WebMovieNow.”

For more on the film, see the links above.