Sundance has a rich tradition of premiering great on-screen romances, as far back as Linklater’s Before Sunrise in 1995, and more recently with Like Crazy, last year’s Grand Jury Prize winner.  Carrying this torch into the 2012 Festival is The First Time, the sophomore effort from director Jonathan Kasdan (In the Land of Women).  A meditation on the excitement, anticipation, and unavoidable angst of young love, First Time stars  Dylan O’Brien and Britt Robertson as star-crossed high school students drawn together over a single weekend. 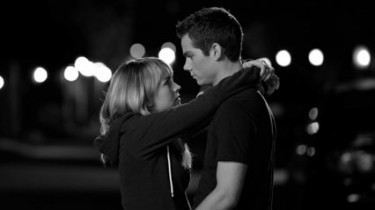 Filmmaker: What were your creative goals when you first conceived of this project? Were there specific emotions or ideas that you wanted to explore?

Kasdan: Hmm… Well… When I started writing I had two primary goals: First and foremost I wanted to write something that could be made very cheaply. Like ridiculously cheaply. Something that was very simple logistically (no car chases or interweaving plotlines) so I would have an opportunity to really focus on working with actors and finding moments between characters; as you would with a play.

Forgive a minor tangent here, but let me say this: the older I get the more I think that it is incredibly difficult to make a good movie. To do anything well is challenging. You need look no further than your local multiplex for proof of how rarely things turn out good. So when I wrote this script I was at a point in my life , and I’m still at this point, where I think to myself – if I can do even ONE thing kind of… okay – then that would be great. So I asked myself – what’s a really modestly ambitious movie I could write?

The second, equally important requirement for me is that I have to be completely emotional about the subject. I have to find some way to tap into my angst and frustration. It’s not a lofty or ambitious thing; it’s just that if I don’t have that engine, I won’t finish the script. So for me, high school and high school romance is a fairly reliable way of tapping into something personal and emotional (and also, inherently cinematic – the iconography of high school, etc.). I thought, maybe if I could just write a movie about two kids falling in love – from the moment they meet to the moment they decide they’re “dating” – and if I could pour into it all the longing, and desire, and romance I associate with that period in my own life – then maybe that’s a reasonable goal that could be achieved at a reasonable price.

Filmmaker: This is your 2nd film about young love. How did your experience filming In the Land of Women impact the choices you made on The First Time?

Kasdan: I have complex feelings about In the Land of Women. There are aspects of it that I’m proud of – I guess I’m proud of the values that it aspires to be about, its humanistic attitude toward people, relationships, connection, etc. – particularly in an increasingly cynical and “ironic” culture. But to me, it doesn’t really work as a movie. It’s important to note that all of the reasons it doesn’t work were entirely my fault. I had an amazing cast and crew who did terrific stuff, it’s just that the movie itself doesn’t “work” as a complete entity. (“working” and “not working” is very ephemeral and subjective thing. I mean, there are beautifully-made, well-intentioned movies that just don’t work – Public Enemies – and there are crappy, shameless movies that totally do – Deep Blue Sea).

I think this goes back to your first question in that, one of the big problems was that In The Land of Women wanted to be too many things and ended up being none of them. So, in a way, everything about In The Land of Women impacted the choices I made on virtually every aspect of The First Time, from its very conception. Specifically how small and compact a story I would tell this time out. So much of this movie is me reacting to things I felt did, but mostly didn’t, work with In Land of Women. Another, perhaps more positive example is that, one of the aspects of In Land of Women that I actually did feel good about was the experience of working with Adam Brody and Kristen Stewart. And I knew that I wanted to once again work with young actors that were energetic and excited to be there.

Filmmaker: At what point did you decide to limit the film’s time-frame to a single weekend? How did this decision affect your storytelling process?

Kasdan: There’s a great interview with Tony Gilroy that came out around Michael Clayton. In it, he talks about how, for a long time, he wanted to write a movie about a fixer at a law firm but he didn’t know how to do it. So that notion just sat there for years. And then finally he said, “Alright. I’m just gonna figure out ‘the days’ over which this story would take place. Just that.” Sounds like sort of an obvious thing, I know, but I think it’s really a key to the whole screenwriting process, at least for me. You don’t really have anything until you have “the days” your story takes place over. And the moment you do have that, then you can sort of figure out a three act screenplay. When I was in high school, I simply – completely – lived for the weekend. The school week was spent waiting for that period of time between 3pm Friday and 8am Monday. And in my internal montage of my high school years, every single important image comes from some weekend night – a party, a girl’s house, a movie theater – that’s when the drama and the fun happened. So for me it was a very natural way of figuring out “the days” for this script.

Filmmaker: Britt and Dylan both give really surprising performances here. How did you come across these two relative unknowns?

Kasdan: My least favorite part of the process is casting because you meet hundreds of incredibly talented and versatile actors and actresses that all bring something unique and special to their roles – and then you have to pick two of them. The casting process on this movie was lengthy and intense – partly because the teenagers reading for these roles seemed to respond very personally to the script. They were very invested – which was great in a way, but also really tough ’cause almost mpme of them got to do it.

I had brilliant casting directors in Amy Britt and Michael Nicolo, as well as the experience and wisdom of my producers Martin Shafer and Liz Glotzer. It was a collaboration between the five of us. Ultimately, we came down to about ten phenomenal kids (five boys/five girls) and had them read the scenes together, mixing and matching, trying different combinations. All of them would have been interesting (and totally unique) versions of this movie but Britt and Dylan, both incredibly exciting in their own rights, had a special chemistry together.

Britt is extremely experienced for someone her age (or any age). She’s done tons of movies and several television series. Her skill and experience put me at ease, particularly with a role as challenging as this one. She’s really the emotional soul of the movie for me. Dylan had relatively little experience at the time, but he possesses a totally innate, natural charisma and comic instinct that, combined with his physicality, creates a pretty dynamic package. They couldn’t be two more different kinds of actors, with more wildly different approaches, but they worked – I think, I hope – incredibly well together.

Filmmaker: Do you have an all-time favorite movie romance?

Kasdan: Oh man, so many… too many to list. I always struggle with these kinds of questions because I love so many movies so much. Here are two of my favorite romances: David Lean’s film Brief Encounter is a devastating and near-perfect movie. I go back to it between every script I write, just to try to remind myself of how little talent I have and how stupid I am. It’s one of those movies that makes you believe the old maxim – romances endure only when the two characters don’t end up together.

But then what about Notting Hill!? NOT a great movie, but a killer romance, driven largely by the inestimable charm of Hugh Grant and a truly funny script. When that movie ends, at the big press conference, and she asks him to repeat his question, “How long do you plan on staying in England?” And she answers, “Indefinitely.” It’s just a sweet, “ahhh” moment. I think that moment succeeds in exactly the way one hopes they’ll succeed when making a romantic comedy. No matter how cynical you are (and I’m a fairly dark dude), you walk out of theater thinking, “shit, love is pretty cool.” And to be honest, if this movie makes anyone feel that way, even a little bit, when they walk out of the theater, then that’s all I’ve ever hoped it would do.