PREPPING “MY BEST DAY” FOR SUNDANCE 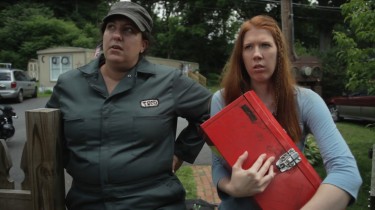 If I had a child, I would name it Reel. Reel 2-pop Greenwell. Reel because breaking my movie in 15 minute reels has bought me time to work on one part the movie while the composer, sound mixer or color corrector is working on another. There is one more chance for every one to make it better before it goes off into the jaws of Sundance.

2-pop because if everyone gets the same reel with 2 frames of tone popping at the front of the reel and the back end of the reel– If those pops line up to the 2 frame title card that says START and END- all is well. Nothing is out of sync, the music and sound cues are lined up with each other. All is right with the world.

As I watch our movie in the mix I’ll marvel at far its come and then squint and ask “Is the sync loose there?”. Now I’m met with a flat “Pops lined up right?”. I think I should deliberately throw one clip sync out of sync just to remind myself art shouldn’t be perfect.

The movie was, as many directors admitted to each other at the Sundance NYC orientation, far from perfect and a rough cut when we applied. If you shoot in the summer it’s an unwritten law that you “go for late submission Sundance deadline”. You don’t really think you’ll get in, but deep down inside you think you will. You jam through the deadline, turn it in, go through a sluggy depression after watching the cut that was sent then slowly rebuild yourself back into the “fix it” zone.

“You’re a director, it’s your job to dream” my editor shrugged after learning we got in. “That’s why I told you to apply.” He then flicked his cigarette “I’m an editor, it’s my job to worry. You realize it needs a lot more work right?”

Little does my editor know that as a writer, it’s also my job to secretly judge myself with deep routed dysfunctional child hatred. Of course it needs more work. Not only does it need more work, I’m a failure.

In this case you seek professional help while fixing your film; you get a PR person. The PR person tells you that you’re are a talented piece of gold with a great film and that everything is going to be OK. They work on getting you interviews, reviews, sales agents, distributors and a festival strategy. They’ve got enviable moxie. They only look at the assets because there are no liabilities to your film selling-just a more specific audience to find. And they find a way to sugarcoat nothing at the same time.

The other help is to have someone to handle the tickets to your screenings. You are allowed a certain amount per screening as an accredited filmmaker. The tickets become the key to Willy Wonka’s Chocolate factory. They are dog eared for cast and crew, friends, family, talent agents, managers, sales agents, press and distributors and traded like cigarettes in prison amongst Sundance festival goers. They are their own life force at $15 a pop. They become a full time job.

Throughout Sundance prep I’ve tried to stay “happy”. I got what I’ve wanted since I came to NYU to study screenwriting. Getting into Sundance is like hearing the words “Will you marry me?” The fantasy phrase “We would like to personally invite you to the Sundance film festival…” was said to me while I was pacing in the corner of my Brooklyn apartment near the kitty litter box.

Finding you’ve gotten into Sundance is a little bit like being a scrappy and passionate street fighter who gets a bout with Mike Tyson. You knew it all along that you deserved to be in the ring but are suddenly very aware that you might get your head knocked off. The Sundance Film Festival is a huge marketplace.

Most independent filmmakers are so used to rejection they actually expect it. I was genetically wired to make personal films in the entertainment business. I always sided with the underdog as a kid. I fancied myself Rikki-Tikki-Tavi, the young mongoose who beats the cobra with whit in spite of size. I felt personally crushed and surprised every time a Wile E. Coyote invention would backfire.

There’s no way in hell you could tell me not to make my personal movies. I should have realized no one COULD tell me I couldn’t make my movies. I just couldn’t expect to necessarily get paid to make them.

Money is made in entertainment by accommodating large groups of audience members. So it’s nearly impossible to convince an investor that your female driven ensemble comedy also featuring working class queers in a trailer park is going to strike it rich just like Paranormal.  “The man” doesn’t need to believe in me. “The man” just wants to make money from me. Big difference. Incidentally, My Best Day will make money. Come talk to me and I’ll tell ya how.

Year after year I felt like a jack in the box popping out to the world to present the project that would “take me to the next level” then stuff myself back in with bitterness. “They’ll see. They’ll all see…”

Getting into Sundance makes me realize I have been taking myself to the next level and I had support all along.  Success is in the making not the rewards. Sundance is a huge chance for exposure for the film and the careers of everyone involved. Now I need to enjoy it.