Inside the Canon C300 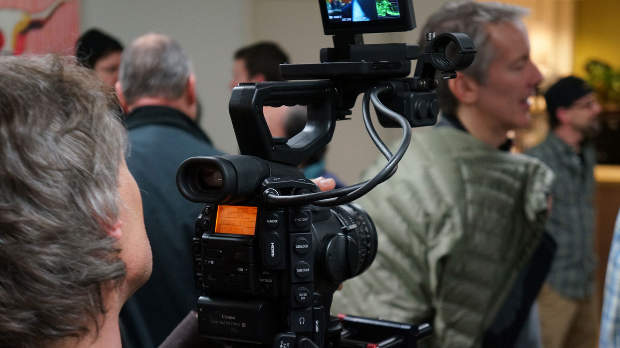 by Michael Murie
in Cinematography, Filmmaking
on Jan 19, 2012

When Senior Director of Professional Engineering and Solutions at Canon, Larry Thorpe spoke recently about the Canon C300, he talked quite a bit about the sensor in the camera. His explanation of why they developed an HD camera rather than a 4K sensor, and how the image is processed, is especially interesting.

The following is an edited transcript of that part of his talk [You can see a video of his full talk here: Canon EOS C300 Pub Night with Larry Thorpe on 1.5.11 Vimeo]

There’s also a Canon white paper, written by Larry, that covers this and other aspects of the camera: on Canon’s website: New 35mm CMOS Image Sensor for Digital Cine Motion Imaging [PDF]

It is a single-sensor, large format sensor, and that sensor is in every respect, a true-blue 4K sensor. It’s 4206 horizontal and 2340 vertical, so we can make any flavor of 4K that we want inside that sensor.

But we elected not to make a 4K camera with that 4K sensor.

Now why would you make that, when everybody’s talking about 4K, and even 5K? Very simple: when we looked around, globally, we said “well, where’s the action?” The action is in High Definition: television commercial production worldwide. In moviemaking, not everything is done in HD, but to date, most of the digital movies have been done in an HD format.

So we saw a marketplace that we could plunge into right away, and start to build a business.

We did some very clever things with the image sensor that allows us to make terrific HD. The image sensor is a 4K sensor, but because we come out of the camera with high-definition, we elected not to use all of the photosites. We made one of the flavors of 4K, which is affectionately know as a Quad HD. The HD standard at the high-end is 1920 x 1080, and if you multiply that by 4 you get 3840 x 2160, and that’s the format that we utilize in this imager. 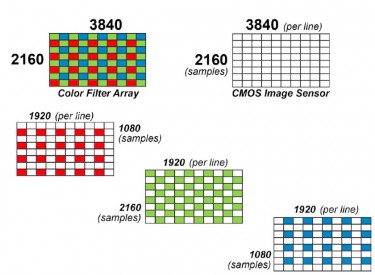 Extracting component colors from the C300 sensor – from Canon

We do use the classic Bayer color filter array – the same as the ARRIs and the REDs and everybody – but we don’t de-Bayer. We use the Bayer mask on the sensor to do the red, green, and blue encoding.

The secret sauce, the magic in this baby, is those two greens. Those two greens are separated by a half a pixel, vertically and horizontally. If you add those two greens, you get an absolute cancellation of the first order alising, so you have an extremely clean green that nobody else can do. Once you matrix to get the black and white signal, the luma, that’s 70% green. That terrific green makes a terrific luma, and that’s one of the things that has been noticed in this; just what a clean, sharp picture is being made by this camera.

The other secret sauce, and we’re not talking an awful lot about it because we’re patenting it, but the photosite is totally new, and quite extraordinary.

The sensitivity of the camera, you really have to see it to believe it. You can dial this thing up to ISO 20,000, in full motion imaging, and the picture is extraordinary. Now is there noise? – Yes, but you look at it and say, “it’s not what I’m used to seeing when you jack up the gain in a video camera.”

We completely eliminated fixed pattern noise, which has been one of the things that sensor folk have wrestled with for twenty-thirty years in solid-state imagers. And that’s the thing that always made video – when you go up high in gain – look different than film grain. Well you won’t see that structure in this when you go up in the gain. You will see noise, but it’s not grain, it’s evocative of film grain. And again, it’s one of those things you just have to look at to see.