by Alicia Van Couvering
in Filmmaking, Sundance
on Jan 21, 2012

Now in its sixth year, the New Frontiers section at Sundance premiered yesterday at its new home at The Yard, in an unassuming building across from a snow-cloaked cemetery. Presenting the year’s crop of new media, transmedia and experiential video art to a room of press, Sundance programmer Shari Frilot explained her curatorial criteria, though not before a number of the pieces had to turn off their sound (a booming heart beat coming through the wall of Ho Tzu Nyen’s The Cloud of Unknowing on her left, the Wagnerian glory coming from Marco Brambilla’s Evolution (Megaplex) to her right.)  “What will resonate and expand film culture?”

Speaking before the festival, Frilot expanded on the function she wants New Frontiers to serve for Sundance viewers. Whereas previous years have focused on how we use technology and new systems to blend our body and media, this year seems to be all about how technology uses us; how to step away from the overwhelming control screens have over our day and consider what it’s doing to our relationships and our selves.

“Technology in consumer society seems to hold the promise to transcend our physical limitations,” says Frilot,  “oftentimes to the purpose of conquest and advancing our individualism. There’s a performative personality that you have with your gadget and technology. I bristle against that; I’m interested in other ways of using technology that enhance other values beyond proprietorship and individual advancement, like vulnerability and insight. This show is willfully trying to stake that ground.”

Marco Brambilla’s Evolution (Megaplex) opens the show. You’re handed a pair of 3D glasses and faced with a giant screen, slowly rolling across a kaleidoscopic scene straight out of a Hieronymous Bosch painting. Orgres stab at maidens who writhe under bolts of lightning as armies of Orcs and Ancient Greeks attack a mountain under throbbing clouds and rainbows. Each element is lifted directly from a modern motion picture and collaged together. As you try to work out some type of cohesive narrative for what’s going on – is this an elf world under attack by lady wizards? – you’re invited to step back and just marvel at the thing. Brambilla says he wanted to explore “the removal of narrative to be only spectacle…[in films today] the spectacle is the thing you’re going to see,” at the expense of narrative or theme. 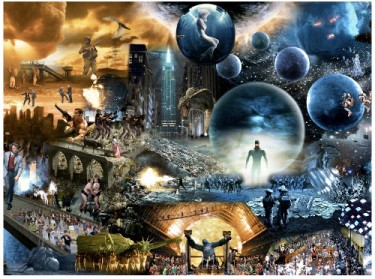 Nonny de la Pena is a journalist who went looking for a way to use technology to expand our experience of current events. The result is a 5-minute virtual reality experience Hunger in Los Angeles. You don a 3D helmet and headphones and find yourself on line at a food bank on Skid Row in LA; though the people are computer animated avatars of who was online that day, the audio is de la Pena’s own recording of the afternoon. Suddenly the man behind you has a diabetic seizure; an ambulance arrives. I jumped when a CGI EMT pushed me out of the way – the sense of being there, of helplessness, bureaucracy and fear, really does affect you in a new way when your whole body is thrust into a scene.

Many other works expand on the theme of individuality and self-awareness in a new, technology-saturated world. “We’re at a point now [with technology] where we have to reevaluate where we’ve come, and how it’s going to set us back,” says Frilot. Paul Abacus/Early Morning Opera/Lars Jan’s work ABACUS riffs on the new paradigm of Ted Talk-style self-promotion. A performance piece ongoing through the festival, Abacus’ character will travel through Park City with his own personal steadicam team and 10 personal paparazzi photographers. Bedecked in a headset and live-broadcasting throughout, with self-promotional power points employed periodically. The new ways we communicate, says Abacus, “makes for semi-fictional people obsessed with broadcasting themselves. I’m curious what that does to relationships and our sense of self.” Question Bridge: Black Males turns the confessional video / video chain letter concept “into a kind of Hydra,” says Frilot, “a social network as a kind of production entity.” Artists Hank Willis Thomas and Chris Johnson, in collaboration with Bayete Ross Smith and Kamal Sinclair, put black men across the country in a rooms, alone with a camera, and invited them to either ask a question to another theoretical black man or answer one themselves, such as, “when you wake up in the morning and look in the mirror, do you see a black man or a man?” By removing the self-consciousness and performative pressure of a social interaction, the artists were trying to a deeper conversation that black men could have with each other. “It’s a really difficult problem translating experience into form,” said Willis Thomas, reflecting on the show as a whole.

“I don’t think of New Frontiers as an art show,” says Frilot. “I think about it as an expanded cinematic presentation. Then I present to some of the programmers here and see what works with them. If the piece makes them feel like they haven’t read the right books, then it’s probably wrong for us. It has to speak to film festival audiences; the way they feel about storytelling and their expectations of how to tell stories with the moving image. It has to speak film festival language; film watching language.” Ho Tzu Nyen’s work The Cloud of Unknowing reflects this idea in perhaps the most pure way: you enter a quiet sanctuary filled with smoke and vapor, sit down with other viewers on huge, white circular couches, and stare, together, at a glowing white screen, the sound of a heart beat echoing around you. 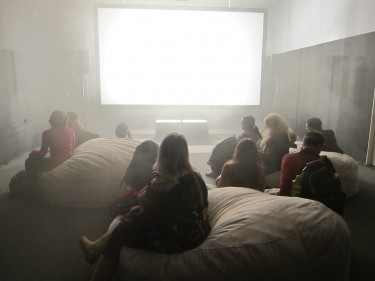 You may have already read about Bear 71 on this website. The work, by Jeremy Mendes and Leanne Allison, allows you to engage with eleven years of a bear’s life in the wilderness by becoming either the bear or being yourself, looking around at its environment. A real-live bear scratching post frames the installation as you leave the New Frontiers building. Surrounded by glowing walls, fiberoptic cable, headphones and touchscreens, the tree almost feels like the fakest thing in the room.