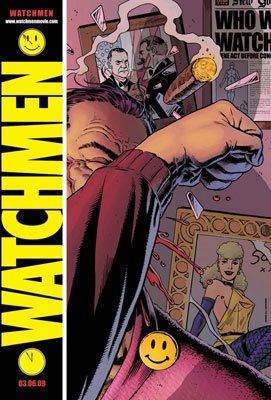 I’ve blogged before about the legal saga surrounding The Watchmen, which is the film news world equivalent of a slow-motion car crash. If you’re a producer, the idea that your film could be held hostage after its completion due to legal issues is the ultimate nightmare.

One of the film’s producers, Lloyd Levin, has written an open letter that is posted over at Drew McWeeny’s new blog, Hitfix. An excerpt:

One reason the movie was made was because Warner Brothers spent the time, effort and money to engage with and develop the project. If Watchmen was at Fox the decision to make the movie would never have been made because there was no interest in moving forward with the project.

Does a film studio have the right to stand in the way of an artistic endeavor and determine that it shouldn’t exist? If the project had been sequestered at Fox, if Fox had any say in the matter, Watchmen simply wouldn’t exist today, and there would be no film for Fox to lay claim on. It seems beyond cynical for the studio to claim ownership at this point.

By his own admission, Judge Feess is faced with an extremely complex legal case, with a contradictory contractual history, making it difficult to ascertain what is legally right. Are there circumstances here that are more meaningful, which shed light on what is ultimately just, to be taken into account when assessing who is right? In this case, what is morally right, beyond the minutiae of decades-old contractual semantics, seems clear cut.

For the sake of the artists involved, for the hundreds of people, executives and filmmakers, actors and crew, who invested their time, their money, and dedicated a good portion of their lives in order to bring this extraordinary project to life, the question of what is right is clear and unambiguous – Fox should stand down with its claim.

My father, who was a lawyer and a stickler for the minutiae of the law, was always quick to teach me that the determination of what is right and wrong was not the sole purview of the courts. I bet someone at Fox had a parent like mine who instilled the same sense of fairness and justice in them.

The hardline attitude towards this case is articulated by David Poland over at the Hot Blog, who calls the letter “bullshit.”

Is there anything more pathetic than a movie producer… a producer of expensive movies… suddenly wanting to sit around the campfire, hold hands, and sing Kumbaya, and talk about what’s “right?”….

This is not an Orson Welles movie being left to die. This is not Mapplethorpe being censored in Cincinnati. This isn’t even a publishing company doing a book deal to assure that the book will never get released because they don’t like the contents.

Meanwhile, Nikki Finke posts another update on all the legal skirmishing.