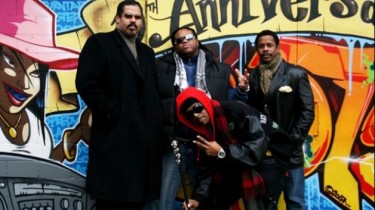 Every year The Slamdance Film Festival is responsible for premiering at least a half dozen films that go on to lengthy fest circuit runs (The Guatamalan Handshake, Without, The New Years Parade, Stranger Things), cult viability (Murder Party, Snow on tha Bluff) and in the case of the 2008 selection Paranormal Activity, massive box office success. This year will likely be no exception. But after surveying a third of the ten narratives and eight documentaries in the always eclectically programmed festival’s 2012 slate, no true standout has emerged, although a number of solid efforts are on display.

Before its screening, buzz (at least in my Brooklyn circles) built to a fever pitch for Keith Miller’s Welcome to Pine Hill, a film produced in part by members of the Brooklyn Filmmaker Collective, a lovely Kings County filmmaker support network that I’ve been sporadically involved in for a number of years. I greatly anticipated the film, which is an honorable picture with a tremendously powerful central performance by Shannon Harper, a Queens resident with no previous acting experience. His riveting sidewalk encounter with Mr. Miller, detailed in an earlier post on this site during the festival, along with the death of Rene Golvan, a longtime member of BFC who succumbed to cancer far too young in June of 2010, inspired this slim yet involving tale.

Told mostly in somewhat longish, occasionally clumsy takes that may mean to evoke Tarkovsky but aren’t quite polished enough to create the same measure of existential dread and wonder, Harper plays an ex-hoodlum who takes a tiny but not insignificant amount of pride in his middling but stable career as a small claims insurance adjuster. After discovering he has terminal stomach cancer, his world comes crashing down around him. Uninsured, he frequents bars and the old haunts of his life amongst the outer borough black underclass, withholding his condition from those around him. He chooses to journey to the town which gives the film its title, although for what purpose besides a lonely, rural death is left unclear.

Harper is darkly complected and the filmmakers do his incredible performance no favors by choosing to under light him consistently throughout the film. Welcome to Pine Hill produces its share of electric moments (especially between Mr. Miller and Harper at the beginning, and Harper’s visit to his mother), but many others, especially the myriad encounters the protagonist has with mildly offensive caucasians, don’t do the premise or Mr. Harper justice.

Andrew Edison’s Bindlestiffs, which also received a significant amount of buzz pre-festival, is perhaps the first feature film ever to screen in either Park City fest which was produced and directed entirely by teenagers. It shows. Juvenile in the extreme, this asinine debut for Mr. Edison and Co. will surely be embraced by many for its puerile humor and sex-and-drugged-up infantilization of The Catcher in the Rye, but it is nothing more than a schematic live-action cartoon that will greatly offend the meek and merely disinterest most others, except for studio execs of course; their business is infantilization. The moments when it shows the promise of growing into a more interesting meditation upon teenage rebellion, angst, the lust for experience and desire for sexual maturity, come and go rather quickly. While not necessarily unfunny, the more significant problem is the film’s fundamental lack of curiosity about the actual world these characters inhabit.

More promising is Daniel Martinico’s Ok, Good. A film that takes as its subject the genuinely awful life and times of a struggling, middle-aged actor, it is an aesthetically rigorous and routinely terrifying look at a demeaning way of life. In depicting the downward spiral of its subject, played by Hugo Armstong with all the skill and flare his character lacks as a performer, Martinico employs a tone that is reminiscent of Lodge Kerrigan’s films. This clearly limited and unhinged Los Angeles actor struggles through audition after audition, haggling with a local printer over the cost and timeliness of producing his head shots and, most memorably, attending an acting workshop that most closely resembled a cult of the deranged and mentally disabled. The film grows repetitive and tedious at times, and the refusal to allow us to empathize with its subject proves to be both its strength and its weakness. But enough impressive things are going on here to spark my curiosity about Martinico as a filmmaker.

Speaking of downward spirals, James Stetson’s documentary featurette Kelly, about a Latin boy from North Carolina who grows up to become a meth-addicted, post-op tranny whore in the seedier precincts of Los Angeles, is a real downer. I mean that as a compliment. Stetson’s film crawls under your skin over the course of the 50 minutes he asks you to spend in the company of this deeply troubled young woman, who we slowly learn is about as unreliable a narrator as one will find in any film this year. After being evicted from her apartment, where she was taking hidden camera footage of the various, often violent tricks she would pull, Kelly takes up in a low-rent motel for awhile before venturing on a crosscountry bus trip to visit her mother and siblings in North Carolina. Stetson is clearly very invested in Kelly’s fate, perhaps more than he should be while creating an objective portrait of this individual, but by the end so are we; she’s deeply dislikable but unforgettably human. 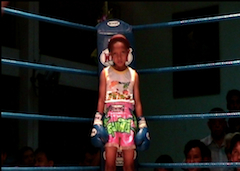 Todd Kellstein’s Buffalo Girls follows the fates of two very young (and female!) Muy Thai fighters. Who knew eight-year-old girls could be so viscerally violent and vicious? Utterly sweet and charming outside the ring, Pet and Stam are training to become world-class prize fighters in order to help their families sustain a comfortable standard of living at an age at which most western girls are contemplating Barbie dolls. Apprentices in a 700-year-old martial art with a rich history and loyal following in their native country, we learn that they are but a pair of the nearly 30,000 child fighters in Thailand. Shot in rough-hewn standard def, the movie is a mixed bag, with long sequences of training and life away from the ring that would be more interesting if Kellstein didn’t slather long stretches of the film with a Sigur Ros-esque score that feels more manipulative than it was probably intended to be. Still, the two encounters Pet and Stam have in the ring are utterly engrossing and occasionally cringe inducing.

While it’s not quite as fun as it ought to be, Roger Paradiso’s I Want My Name Back is a must for any hip-hop aficionado or rap doc completist. Of course, these docs are a dime a dozen these days, with two or three seemingly appearing every year at major festivals; in Park City alone, Michael Rapaport’s A Tribe Called Quest doc Beats, Rhyme & Life was a huge hit at the Sundance last year, while Ice-T’s more comprehensive hip-hop history The Art of Rap has unspooled to mostly raves so far at the 2012 edition. Slamdance too has a long history of programming stellar rap docs (Rock the Bells immediately springs to mind) and Paradiso’s profile of the legendary Sugar Hill Gang, perhaps as responsible as any act for popularizing early hip-hop in the late ’70s (yes, we’ve all heard Rapper’s Delight eight million times), is the newest among them. It tells a pretty familiar story of shady record companies, missing royalties and faded glory before its inevitably uplifting finale. It also suffers from a somewhat clumsy voiceover narration and beats several horses long after they are dead, but who can deny the appeal of these songs or the thoughtfulness with which Master Gee and Wonder Mike unfurl their oh-so-cautionary tales of the dangers to be found within minor music biz stardom.