I’ve been considering many cold opening quotes to this “During Sundance” blog ranging from, “Bagels again?” to, “Marina Abramovic is in the next bathroom stall!”

I’ll let Robert Redford start it with, “There’s Sundance here,” as he points towards the floor at the Directors Brunch “And then there’s Park City,” he indicates down the mountain.

“Park City is not Sundance.”

We directors nod. Bob understands. We won’t buy into the machine of the market place. Our film is already the gold and Bob is warning us to stay grounded.

We then instantly bum rush him as soon as his speech is over to speed gush and get a picture.

“Mr. Redford, I’m Erin Greenwell I just wanted to say when I was little I did a living history presentation of Butch Cassidy and the Sundance kid and I dressed up like a cowboy and nobody picked on me and I realized I wanted to make movies from that moment and I just wanted to say you are one of the reasons I’m standing here.”

Redford radiates a godlike smile “I’m so glad you told me that. Where did you grow up, Erin?” “Missouri!” I blurt as our state flag, bird and motto flash through my head with pride. “May I get a picture with you?”

“Quick real quick” urges his handler, AND ear buds a jangle and hands trembling to the point of dropping my cell phone, I take three and mutter gratefully “Thanks thanks thanks” and step out of the circle.

Opening weekend is a fun and frightening haul. There are three circles of concern rotating through the “Park City” side of me. When is the next interview or photo op for my cast and crew, how’s the premier going to go and will we get a good Variety review?

At the premier, my producer, the AD and myself sit near the door. For every audience laugh, we fist bump. For every moment dropped, we shoot each other furtive glances. This goes on for the entire movie, punctuated by sudden victories “I didn’t think that would get a response!”  Moments of agony include people daring to cough, go to the bathroom or drop their cell phones, which are apparently made out of concrete and recycled copper.

As our mighty cast and crew stretches across the entire stage area for the Q+A, we reflect on the process of it all, volley accolades and share gratitude.  Now that’s Sundance.

“Hold up your badge so we got your name” (snap snap snap). Back to Park City. The interviews and photos are continuing.  Aside from regretting that I didn’t jump rope and eat kale on a daily basis before Sundance as I am now digitally archived this entire time as being puffy, I can’t complain. The premier went well, we are getting exposure and buzz is starting to circulate that our movie is “good”.

But the Variety review. Like the eye of Mordor, we know it’s there, looming.

After our second screening, we go to the composers jam. Our composer Terry Dame and violinist Zach Brock (who played on the score) are going to perform music from the film and jam with other composer alumnus.

As Terry starts to play, I get a text from an actor finishing up tacos across the street:

Back at the hotel, it’s teeth-gnashing happiness, pace-in-circles excitement while we call people, eyes-don’t-blink attention while posting the news on Facebook “We got a great review in Variety!” We’re safe!

The next day I’m rushing through a luncheon that I for once feel emboldened to skip. We had a good premier, we got a good review and now press has thinned out of town. Screw it. I’ll do one lap and leave.

I see an old filmmaker friend and we embrace each other, hold tight and tear up like we’ve been separated by a war.

It kicks in that we are still making movies. Year after year we’ve been getting the message from the biz, academia and even on occasion well-intentioned friends and family that personal storytelling is a crash and burn to any hopes of success.  We’re still here.

For those who got a shitty review, we got one of those too. “Yeah, that makes you not wanna move forward for a few seconds…” exhaled my producer as my skin stung with shame. Nothing a great screening in Salt Lake City and a dozen sports analogies about getting tackled in the NFL wont cure. “Think of it this way. They just saved you $15,000 on a test screening. Now you know who your market isn’t.” shrugged my strategist.

I get to see a movie for the first time with my crew. We drink in the experience and then return to our hotel room to producer news: “(FILM SUDDENLY BETTER THAN OURS), just sold after 15 hours of negotiation with a room full of lawyers and distributors.”

The Park City side of me texts my filmmaking friend whose already been to Sundance “Did you sell out of  Sundance when you were here?”

“We did” he texts back. My heart sinks. “But it took a long time after Sundance to close the deal.” My heart lifts and I go to my room.

I look at the Redford picture while alone and find strange solace. I realize what it represents.

In the picture I am grinning unabashedly open-mouthed. I hate my “beaver teeth” and usually present a knowing, closed lip but warm smile when I take pictures.

FB comments from my friends on the Redford picture include “Cheer up” and “You look like you switched souls with a 5 year old”.

And although filmmakers will say they make art for themselves, there is also the deep down desire, even if you are a provocateur, for one person to connect and say they understand/accept you.

Redford is the ultimate dad and forgetting to hide my joy is so not Sundance or Park City, it’s something all in its own. It’s simply being human. 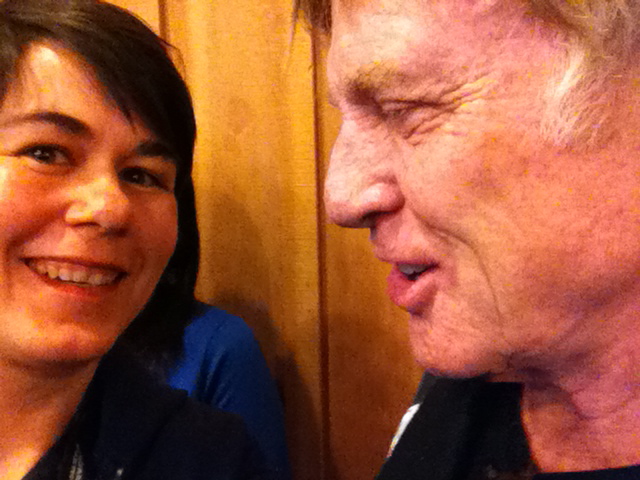