PAUL SIMON, JAMES MURPHY AND THE RESPONSIBILITY OF THE MODERN ARTIST 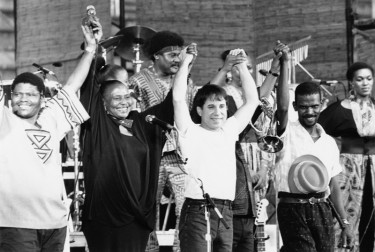 Does the culture make the artist, or does the artist make the culture? Two Sundance documentaries — Shut Up And Play the Hits, which follows James Murphy through the last concert of his band LCD Soundsystem in 2010, and Under African Skies, Joe Berlinger’s history of Paul Simon’s seminal Graceland – might seem to be unlikely bedfellows. Both films are brilliantly executed portraits of musicians walking the tightrope of cultural relevance and personal expression. The differences between the two stories illustrate fundamental changes in our popular culture over the last 30 years.

Both films seek to explore “a moment in time.” For Under African Skies, that’s 1986, the year Simon released his celebrated and controversial album Graceland. His prior album, Hearts & Bones had flopped, providing his first taste of anything but wild success since the ‘60s. “I felt liberated,” explains Simon, not having the record companies on his back expecting hits. “I could kind of just do what I wanted.”

So he accepted an invitation to spend ten days in South Africa. “Intimidated” by the albums of local musicians like Lady Smith Black Mambazo and Miriam Makeba, Simon nevertheless got everyone together to jam. “There were babies in the studio… it was a big party…” The album – which involved further recording in London and New York with the South African singers and musicians, plus an appearance on Saturday Night Live – was a smash. But backlash came quickly, as anti-apartheid groups insisted that Simon had violated a cultural ban in place to protest apartheid, and black American groups accused him of exploiting black musicians for his own gain. Simon ignored their complaints, and set off on a world tour that was widely protested and frequently paused for bomb threats. He arranged a concert in Zimbabwe, and encouraged his South African band to sing their national anthem on stage. While everyone who was part of the tour declares their total affection for Simon and unified disagreement to those who opposed him at the time, other voices from South African political groups contextualize the controversy into which Simon barged. The documentary follows him to South Africa for a reunion concert with the original Graceland musicians, which includes a meeting with the current leader of the Artists Against Apartheid movement for a heart-to-heart.

Though the controversy seems almost quaint now (Jon Pareles, interviewed in the film, declares Graceland to be the first example of sampling in pop music), what’s interesting is the way that Simon disassociates himself from the political quagmire his album was pulled from. Riding in a limo to his hotel after landing in Johanessburg, Simon claims that he was largely unaware of Why Everyone Was So Mad. “They invited me,” “It was a collaboration,” he says over and over, in press conferences then and interviews now. It’s not that he didn’t understand why people were upset, just that he saw himself as an artist operating outside of politics. At the same time, Simon takes full credit for the significance of the album – he points out that the introduction of South African music and musicians into American culture actually humanized Apartheid for many westerners, giving them an emotional attachment to the conflict. He was just having a party in the studio; he was being an ambassador for a global issue. He was just writing songs about Memphis and girls; he was trying to send a message. He is just a vessel; he is the creator. 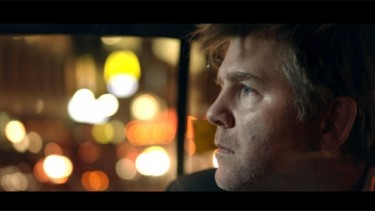 Thirty years later, global politics are far less emotional for American audiences than the pathos of an unanswered cell phone call. Call it a modern marvel that a reluctant, shrugging front man like James Murphy can inspire 17,000 ticket-holders to sob and weep through his last live show. Just like Simon, Murphy is the sneakiest of showmen: pretending to be semi-embarrassed by his own feelings yet bold-facedly giving it his all in falsetto on stage; letting us feel like we know him merely because, hey, he’s just like us.

“Losing My Edge,” Murphy’s half-spoken, half-sung ode to the feeling that you’re no longer relevant, has become a seminal hipster anthem. But Murphy insists it was no joke – that time was really terrifying to him. At thirty – around the time he started becoming famous – he says he decided to try to be as little like a rock star as possible. His persona, the band’s persona, was to be “normal people” who happened to be onstage playing music that inspired other normal people to dance their asses off.

Even Murphy’s history of the band itself is frought with a total lack of ownership over his own actions. “But I didn’t start a band,” he insists, he just recorded a record and happened to start playing live. Asked to come up with a Biggest Regret, all he can do is speak wistfully of a concert they missed because a volcano grounded their plane. He admits they were ambitious, very ambitious… but that he doesn’t want to be famous, he couldn’t be famous, he’s too used to walking his dog and eating meals in restaurants like a normal person. Then what was the goal? “To leave a stain,” says Murphy, after some hesitation. “Your greatest failure seems to be your inability to ever get over your own self-consciousness,” says music writer Chuck Klosterman, whose live interview with Murphy is woven through the film.

Two other films at Sundance crystallize the issues of the festival’s best music docs. The inner turmoil revealed in Shut Up And Play The Hits is turned into a harrowing, hilarious comment on hipster disaffection in The Comedy, a film starring Tim Heidecker and Eric Wareheim, in which Murphy also co-stars. Heidecker plays a Williamsburg layabout due to inherit a fortune. Due to his fortune and his comedian-man-boy culture, there are no consequences to his bad behavior, ever. So he pushes the people around him – girls, cab drivers, his half-dead father’s nurse – as far away as he can, hurling joke after insult after joke, daring them to stand up to his abuse. But they never do. “I’m not a regular man,” admits Heidecker, in one of his only moments of soul-baring. While the real Murphy seems to be sincerely and sweetly dealing with the loneliness of life in which he could actually do anything he wanted at any time, a life in which he must make dramatic moves to be “a regular man,” The Comedy reveals the dark daemon that contemporary hipsterdom could turn him into.

Room 237 takes on the audience’s perspective of the artist, or, more specifically, the obsessive-fan’s perspective. Five The Shining fanatics narrate a mind-blowing clip show of Kubrick’s masterpiece, spinning their yarns of the secret messages they’ve uncovered and theorizing of conspiracies contained within the film’s frames. To paraphrase one thread: “It wasn’t until I got the DVD that I was able to actually watch the film carefully, two or three hundred times… and that’s when I finally noticed The Skier Poster… which is really a minotaur… which if you look at the myth of Theseus… I was jumping up and down once I noticed that, of course, of course!” Depending on how you look at it, the film is either Kurbrick’s treatise on the genocide of the American Indian, a comment on the Holocaust, or a revelation about Kubrick’s involvement in a top secret government project [which I won’t spoil here.] Room 237 is incredibly entertaining, not only because it forces you to constantly wonder about what Kubrick actually meant. Is it possible that any one could make that many deliberate choices? “The artist doesn’t work for the politicians,” says Simon, defending his work to a South African Anti-Apartheid leader, who only moments before, in a direct-to-camera interview, has blamed Simon personally for irresponsibly inserting himself into the country’s politics. Faced with the artist himself (in a meeting staged by the filmmakers), the South African capitulates. “We see you as someone who was caught in the whirlpool of politics,” he demures. The men hug and then shake hands, the camera close up on a white hand and a black hand. Thirty years ago, this man was holding Simon accountable for his work’s place in the culture. But now – when rock stars are just people like us — he’s just a small, Jewish Everyman who deserves a hug.