I empty my pockets of biz cards, coffee receipts and contacts written on scraps of napkins and sing-think to myself, ala Rosemary Clooney –  “Is that all there is?…”

“Let us know when you want to have dinner” a filmmaker Sundance vet texts. “The post Sundance blues are real. Believe it.”

These thoughts must be truthfully reported in this blog even though reading about luxury problems like this would typically make me want to punch the writer.

I was secretly expecting that once you got into Sundance you simply had to hand out butcher tickets to distributors and dig out lotto numbers to the lucky agent who wanted to rep you for a four-picture deal (halfway kidding). 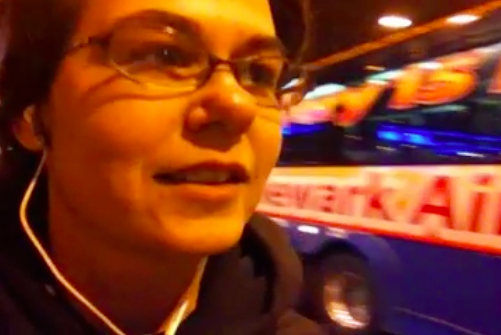 After the crest of the Sundance festival week began to cascade, I fell into contrast and compare mode as news of films selling felt like a backwards Contagion where no one would sneeze on me.

Truth be told, only 20% of features have sold so far but once you get into Sundance, greed kicks in and you want to be in that top 20%. The last third of the festival, a lot of directors start getting murky and mopey.

On one particular night at sushi I excused myself from my crew to go to the bathroom. Overwhelmed, I was looking for the chance to be alone then unwittingly walked right out into the adjacent Mexican restaurant where my cast was eating by the door. “Hey!!!” This happens to actors too, one who admitted with an unblinking smile, “Uh, yeah. I’m ready to go home.”

After the festival, I flew into Newark, NJ and took the bus to Port Authority. Halfway to Brooklyn on the A train I realized I left my bag on the bus at 42nd Street.

An hour-and-a-half later I found myself standing beside the radio dispatcher at Port Authority. “Oh, you’re the one with bag.” He smiled. “The bus driver called it in. He’s coming back off his loop in about 4 minutes.”

“What bag?” the returning bus driver chided before chuckling and throwing open the hatch to reveal my luggage.

As I rode the subway back home I thought to myself “How the hell did you do that?”

I know how. My brain was still swimming with a million thoughts a minute when I stepped off the bus onto my familiar Times Square. Emotions ranged from “We got a rave review in Variety!” to “I met Robert Redford and made him smile” to “Shit, we didn’t sell. I suck”.

We didn’t win anything on Awards Night. Champion directors gave flustered “Um, gosh, gee, whoa…” (spit it out damnit!) thanks and capped speeches with shout-outs to distributors in a peace-out-we-just-sold! fashion.

I wanted to be one of those rosy-cheeked, glassy-eyed directors shouting over dance music to their cast and crew and new admirers while holding their award.

Taking a stroll alone by the coat check, I had somehow spun myself into being a failure.

Ava DuVernay gave an inspired, powerful and gratitude laced speech after winning for Middle of Nowhere. I was slapped into my senses.

A cluster of us shaken Sundance newbie filmmakers formed a line to meet her while she chatted with Anthony Mackie. We didn’t want to meet the star from Hurt Locker (even though he is undoubtedly talented and has lashes to die for). We wanted to siphon our original love and gratitude off the Sundance director.

“The Sundance blues are real.” And talking to other directors, it’s caused by, yes, fear of success. (Punch me now)

Sundance has raised the bar. I got in the room with a higher level of artists and technicians and now I can’t stand by the door. And as an indie filmmaker, there’s a dangerous impulse to keep one hand on the knob and keep complaining you’re not allowed on the dance floor.

Amazing what more than four hours of sleep will do. Today I’ve peeled myself off the floor to plug festival, distribution and sales outreach for our movie into a spreadsheet, write a treatment for a new script idea and type this blog.

To be intimidated by opportunity after swearing, “just give me a chance!” for years is akin to standing up in knee-deep water you almost drowned in. You feel stupid but you don’t quit swimming.