HOW WILL YOU WATCH “RETURN”? 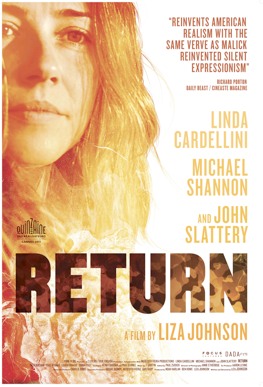 I love going to the movies with other people, but I also love going by myself and being a stranger in a crowd. Either way, part of what is sexy about the cinema is feeling yourself brought together with people you don’t know, having a common experience and physically being alone together in the dark.

Everything I love about the theatrical experience I learned after I left home. I grew up in a town without a cinema, an Appalachian steel town in Ohio. There had been one, the Columbia Theater, but it closed when I was young. It must have closed in 1982, and “Tron” must have been the last movie they played because those letters stayed on the marquee well into the nineties. (The whole cinema suspiciously burned sometime recently—the building is still there but now it doesn’t have a marquee at all).

My new film, Return, is set in a town like the one where I grew up. The main character, Kelli, is played by Linda Cardellini, and she goes back to this town after she’s been away for a year in her military deployment. Michael Shannon plays her husband, and John Slattery plays a man who unexpectedly befriends her.

I’m excited about the way that Return is being released in parts of the country like where I grew up, places that don’t have an arthouse cinema, markets where a small film like mine would never open theatrically. If you’re in New York or Los Angeles, you can watch it in the cinema, starting Friday Feb. 10. And if you’re not, you can watch it on VOD or streaming on all kinds of electronic platforms starting Feb. 28, through Focus World.

In this morning’s paper, I learned that Mark Zuckerberg recently asked, “Do you want to go to the movies by yourself, or do you want to go with your friends?” He says we want to go with our friends.  Well, yes and no.  I stream a lot of things at home, and I like going out to the movies with my friends. And also, when I am out at the movies, part of what I like is being in a crowd of people I don’t know, a group that is constituted by its shared interest in the film. (In fact, this is how I met a lot of my friends.) So I’m intrigued by the idea of Constellation, which seems to be one way to bring a version of this crowd experience to electronic platforms. On February 28, we will stream the film in a group configuration, and I’ll have a conversation with viewers afterwards by webcam. To me this is an expansion of what streaming and VOD can do—I hope what it means is that if you live outside of the cities where the film will be in theaters, you can still feel yourself to be part of an audience, part of a collective experience, part of a conversation.