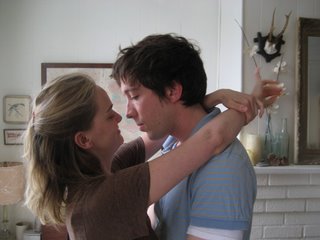 A bit late to the Dance Party USA, David Denby discovers mumblecore in this week’s New Yorker, devoting his entire film column to the genre.

You’re about twenty-five years old, and you’re no more than, shall we say, intermittently employed, so you spend a great deal of time talking with friends about trivial things or about love affairs that ended or never quite happened; and sometimes, if you’re lucky, you fall into bed, or almost fall into bed and just enjoy the flirtation, with someone in the group. This chatty sitting around, with sex occasionally added, is not the sole subject of “mumblecore,” a recent genre of micro-budget independent movies, but it’s a dominant one. Mumblecore movies are made by buddies, casual and serious lovers, and networks of friends, and they’re about college-educated men and women who aren’t driven by ideas or by passions or even by a desire to make their way in the world. Neither rebels nor bohemians, they remain stuck in a limbo of semi-genteel, moderately hip poverty, though some of the films end with a lurch into the working world. The actors (almost always nonprofessionals) rarely say what they mean; a lot of the time, they don’t know what they mean. The movies tell stories but they’re also a kind of lyrical documentary of American stasis and inarticulateness.

Channelling Margaret Mead, Denby forages through some of the familiar discussions of the m-word before the piece reveals itself to be a long wind-up to a brief discussion of Joe Swanberg’s Alexander the Last, which will be premiering at SXSW this weekend and then going immediately to IFC On Demand. While some of us in the blogosphere may find Denby’s acknowledgement of these films, which have bubbling up since 2002, rather tardy, the real story here is the fact that the genre’s slow burn, its public cresting just as most of its practitioners have distanced themselves from the label, has leveraged major media play for films that premiere not in theaters but at festivals. From what I understand, other Big Media Outlets are having their film reviewers cover Swanberg’s latest as well, making it something of a watershed event.

I also think Denby has touched on the apt directorial reference for Swanberg and some of his colleagues as they move forward: Eric Rohmer.

In Alexander the Last, the project is a local theatre production. A married actress (Jess Weixler) attracted to a good-looking actor she’s working with contemplates an affair with him, only to discover that her sister, with whom she’s very close, is already sleeping with him. The story, in its formal symmetries, suggests one of Éric Rohmer’s narratives of advance and retreat in Six Moral Tales. In the past, people in Swanberg’s movies slept with one another without much consequence—the plots were not fully worked out, and many implications, not to mention relationships, were left hanging. The slapdash style of storytelling was part of Swanberg’s cool contempt for mainstream filmmaking. But in Alexander the Last he’s advancing toward a firmer structure and more emotionally explicit scenes.

I’ll let you all decide whether Rohmer is a comparison or a goal, but his name popped into my head as well as I watched Swanberg’s latest movie. Alicia Van Couvering’s interview with Swanberg will appear this week as part of our SXSW standalone section, but in the meantime you can check out her lengthy article on mumblecore, “What I Meant to Say,” from our Spring 2007 issue.