TRIBECA: ALLEN RETURNS TO NYC WITH WHATEVER WORKS 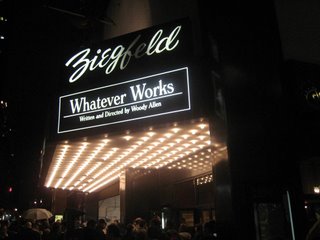 The Tribeca Film Festival opens its eight year with the world premiere of Woody Allen‘s Whatever Works, marking his return to NYC after a four film absence.

Screening earlier this evening at the Ziegfeld in Manhattan (though Allen did show up, sadly he did not introduce the film or do a Q&A afterwards), Allen’s latest work can hardly match his earlier ones shot in his beloved city, so we won’t even go there, instead he constructs an entertaining, conventional (for Allen’s standards) comedy about an eccentric named Boris (Larry David) who describes himself as a “Nobel Prize-worthy thinker” with a whatever works philosophy towards life. We learn quickly that he’s had enough of his and after failing to commit suicide he instead gets divorced and moves downtown where he verbally abuses the kids he teaches chess to and blabs to his friends his hair-brained thoughts on religion, race and politics. With all of this coming out of the mouth of Larry David it’s like watching Curb Your Enthusiasm with an elevated vocabulary. The film really takes off when Evan Rachel Wood enters.

Playing a not-so-bright Mississippi runaway, Melodie, who ends up on Boris’s doorstep begging for food, he sees her as a dimwit with a pretty face (and she is) but deep down this bitter man does want companionship and with that he takes her in and the laughs begin. Like most of Allen’s films the women steal the film and Wood plays the part beautifully with a sweet naive attitude. Completely dumbfounded by what Boris talks about, she takes everything he says as gospel, lending to some hilarious moments.

Unfortunately d.p. Harris Savides is underutilized in the film, keeping shots very basic with most scenes done on soundstages and few Manhattan exteriors. The structure is more like a stage play, with new characters entering through Boris’s door throughout the film, like Melodie’s mother (Patricia Clarkson) who soon fits in seamlessly with the bohemian lifestyle of lower Manhattan, and later Melodie’s father (Ed Begley Jr.).

What really keeps the audience’s attention are the consistent one-liners. They are non-stop whether they be from David, Wood, Clarkson or Begley. And most are very sharp.