TRIBECA QUICK TAKE: GUY AND MADELINE ON A PARK BENCH 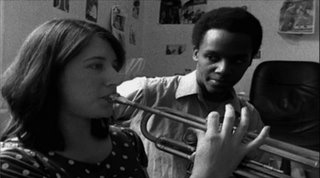 Walk in a few minutes late and you’ll miss the set-up and most of the actual plot of Damien Chazelle’s lovely debut feature, Guy and Madeline on a Park Bench. Guy’s a young, handsome, somewhat taciturn jazz musician who seems to move from one short-lived romantic encounter to another while saving his real passion for his trumpet. Madeline is a pretty, shy, somewhat directionless young woman who meets Guy, is affected by him and his music, and then is abruptly cut loose as Guy’s eye wanders. And yes, that’s all in the first few minutes and told mostly without dialogue. The rest of the movie is the long trailing note of Guy and Madeline’s short-lived relationship, a collection of offbeat and sometimes just ordinary moments given emotional inflection by not only our knowledge of their romantic misfire but also the old-fashioned Hollywood movie-movie-style orchestral swing score by Justin Hurwitz.

Chazelle and I sat down and talked last week, and we batted around several references for his juxtaposition of large-scale romantic musical and minimalist relationship drama. We talked about films like Jacques Rivette’s Haut Bas Fragile and Chantal Akerman’s The Golden ’80s, films that also experiment formally with tropes of the musical genre. But I’d like to throw in one other reference: Once. Although it’s considerably quieter and more elliptical in its storytelling, like that film, this movie is deeply informed by its lead actor’s love for his music and his ability to convey that love through his on-screen playing. Guy is played by Jason Palmer, a Boston-based trumpeter whose debut album, Songbook, was recently released by Ayva Musica. When he takes the stage — in this film, a threadbare apartment jazz club with white walls and black curtains that still seems like the coolest place in town — his performance tells you everything the film’s dialogue doesn’t. (Given the logorrhea of so many contemporary American indie film characters, the quietness of this film’s principals is tremendously appealing.)

Begun while he attended Harvard Film School, Guy and Madeline on a Park Bench was shot, by Chazelle, on 16mm black-and-white stock on a micro budget over two-and-a-half years. His production method — one of fits and starts and quickly seized afternoon moments — mirrors the casual serendipity of his storyline, and the production’s incongruities (almost nothing was spent on production while the Bratislava Symphony Orchestra was hired in Slovakia to record the score) is a story point all its own. Chazelle’s mash-up of downtempo slacker relationship drama with high-spirited ’50s movie musical (the film includes one full-fledged dance sequence) is, of course, a formal construction, but the thrill of this movie is that it doesn’t play like one. Guy and Madeline on a Park Bench is by turns joyful, melancholy and hard-eyed, and it’s the kind of unexpected festival discovery that you really shouldn’t know much about before seeing, so I’ll stop typing here.