REPORTING ON THE NEW VIDEO CAMERAS AND DSLR’S FROM NAB

Linda Wissmath is the Equpment Supervisor, School of Film/Video, California Institute for the Arts, and she attended NAB this year and kindly offered to share her thoughts with Filmmaker readers. Wissmath’s take on several new cameras is a nice tie-in to Roberto Quezada-Dardon’s piece in the new Filmmaker on directors making movies with their new DSLR cameras.

The big news in acquisition this year is the pressure being put on the video divisions of companies by their DSLR divisions. These divisions appear to stay very separate, and even though Canon had their DSLR cameras at NAB there seemed to be a little contention between the “video” sales people at Canon who kept strictly to answering questions about their own products. All the Canon DSLR Camera video features were developed either for photojournalists in mind (Mark ll 5D) or soccer moms (Rebel T1i), but filmmakers have recently embraced these low priced DSLR cameras with their great, large image sensors and ability to swap out lenses despite their lack of basic video controls.

CANON EOS 5D MARK 2 DSLR: The Canon 5D is already in use by our students, Darrell in our photo department reports that his students are shooting lots of HD video mode on these cameras since purchasing three last fall. It has an amazing sensor (36x24mm cmos), great blacks and does incredible in low light. This is 1080 30P using the latest H264 video codec at a data rate of over 38 megabits. Rumor has it photojournalists suggested 30p which makes for transcoding issues. Also the camera lacks manual aperture control without finessing and locking within a range and playing with gain. There’s also some rolling shutter issues with fast movement. That said, droves of filmmakers feel it’s worthwhile to jump through these hoops and get amazing resolution, which was very impressive to see at NAB. Another rumor is that the Mark 5d is really shooting at 29.97 with the wrong header of 30p.

On the latter issue, here are two comments from users posting at the DV Info Forum:

“I’ve actually read that the guys over at Cineform actually think the 5D2 records video at 29.97 but incorrectly states true 30.00 in the header of the file. If true, the audio sync problems are actually due to our NLE’s relying on the incorrect header information”

Another user reports: “The 5Dmk2 only flags the files as 30p. It shoots at 29.97p. If you bring the files into cinema tools and reconform to 29.97 (no render needed since this is only a change to the meta data) and then drop the files into your FCP timeline, you will find out that the 5Dmk2 shots sync up just fine. I have confirmed this with my HPX500.”

At $2700 for the body it is a powerful tool. Yet another rumor is Canon plans to put this sensor in a true video camera to be released next year.

CANON EOS REBEL T1i DSLR: This camera will be released in June for $899 and it includes a EF-S 18 -55mm lens. This is a 15.1 MP CMOS sensor and 14 bit image processing with High ISO up to 12800 for low-light conditions. It shoots very quietly due to new technology. It shoots 720p at 30p and 1080p at 20p. The sensor has very similar ratings to the 50D which we are purchasing as stop motion cameras. Because the sensor is a big improvement in the Rebel line and it shoots 720p and is under $1000 I think we’ll see a lot of these as the new popular camera. 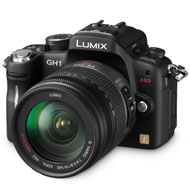 PANASONIC GH1 DSLR (pictured): This DSLR was not at NAB and was just released in Japan on Friday. People are just starting to post. At $1,500 US equivalent in Japan you get a 12.1 megapixel with 4/3 live MOS sensor, data rate 17 mps. This camera shoots 1080p 24fps with full manual control in video mode, AVCHD or AVI Motion. This camera will either set a new low price and a new standard or disappoint an anxious market. The controls and 24fps is what Canon has not done, and if the quality is good this Panasonic will be a camera that will have a big impact on the market

SXS CARD ADAPTORS: I spoke at length with the owner at Hoodman who sells an SxS adaptor for SD memory and is having great results. Definitely a direction we will take in our future memory purchases. They also have great accessories for digital photography.

Editor’s note: Wissmath says that the new Panasonic GH1 DSLR “will either set a new low price and a new standard or disappoint an anxious market.” Well, David Pogue of the New York Times has played with the camera, and he is not disappointed… not at all.