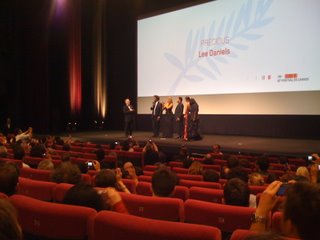 Producer Noah Harlan is in Cannes taking part in the Atelier with Jake Mahaffy’s new project, and he sent the following report on the business and marketplace vibe there (along with comments on two films).

Cannes is slow. No question about it. Last year I heard how the pace of coffees in the market was slow. This year these are my unofficial barometers of how crowded it is here?

1) Everyone agrees there are about 1/3 as many yachts in the bay off of the Croisette. (Admittedly that’s probably fewer rich sightseers than actual participants but it’s noticeable)

2) Tonight, 2:00AM, lobby of the Carlton. Usually every chair in the lobby bar would be full with people standing at the bar. Tonight, there were at least 8 tables of 4 seats sitting empty.

3) The Croisette has a fraction of it’s usual car traffic. Typically it’s bumper to bumper from morning to night. Now, not even close. The only traffic jams I’ve seen were immediately preceding a premiere when the gendarmerie close part of the road.

Also limiting the crowds is the weather. It’s been cold & rainy thus far and that hinders things. The sun is supposed to come out tomorrow so we’ll see how it looks by the clear light of day.

My friends with sales companies are saying that things seem positive so far but frankly, two days in, it’s far too early to tell. Everyone I think is waiting to see where they are on Monday, after the weekend. By then we’ll have a picture of the market. That being said, the stalls are quieter and, though it could be my imagination, I think there are some empty ones which I’ve never seen.

I’ve caught two films, the premiere of Fish Tank in Competition yesterday and Precious (aka: Push) tonight in Un Certain Regard. Both were strong, though I felt the arc of Fish Tank was telegraphed too early and the story lacked some body or heft. Precious is exceedingly strong, if a bit overly emotionally manipulative at times. The performances are fantastic (I’m calling nominations for either/both Mo’nique for Best Supporting Actress and Gabby Sidibe for Best Actress), including really nice turns by Lenny Kravitz and Mariah Carey — both of whom were there for the premiere (see attached iphone pic).