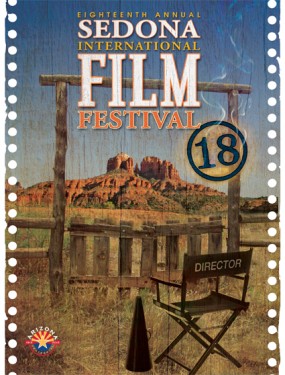 Although in the winter most Stateside independent filmmakers set their sites on Sundance and SXSW, while international directors target Rotterdam and Berlin, the cold hard reality is that the majority of cinema’s craftspeople aren’t going to have their labors of love accepted into even one of these fests. (Forget about being wined and dined by the Weinsteins.) That’s the bad news. The good news is that as indie fests increasingly become less populist and more Miramax-ish, regional festivals around the globe are looking to step up to the plate.

I’ve covered a number of these homegrown events, many times basing my choices on recommendations from friends and colleagues. Such was the case with the Sedona International Film Festival, which takes place in Arizona’s famous – and infamously kooky – red rock country. Surrounded by majestic mountains seemingly sprung from Middle-earth, and boasting a population for whom “Vortex” is a household word (the local chamber of commerce’s website even has a link to the Sedona Metaphysical Spiritual Association), this high-desert destination seemed as good a place as any to make some unique discoveries.

It was actually one of my non-blood relatives, a longtime shorts programmer, who alerted me to Sedona’s “It’s the accommodations, stupid” factor – i.e., that SIFF is one of the very few festivals to offer the same stellar lodging to all attendees regardless of a movie’s running time. (How many short film directors get a golf course attached to their comped hotel? Seriously.) Another friend, who happens to be the local beat reporter, mesmerized me with tales from last year’s edition, which not only featured invitees Nicolas Cage, Jonathan Winters and Gary Sinise, but a rip-roaring drunk Rip Torn showing up to every party. (What I wouldn’t have given to see Nic and Rip chowing down together at all the free buffets. Alas, instead I spent my time strenuously avoiding Peter Bogdanovich and the Sorvino clan for fear that a publicist would try to rope me into conducting an interview.) Then there was the lure of visiting ISTA, the International School of Temple Arts, founded by Sacred Sexual Shaman Baba Dez (subject of Jonathan Schell and Eric Liebman’s Sex Magic: Manifesting Maya, distributed by IFC Films). Unfortunately, Sedona’s Sexological Body Workers seemed to have closed up shop after a recent police raid. (Baba Dez, I heard, was conveniently somewhere in New Zealand, spreading the tantric gospel on a world tour.)

But back to the regularly scheduled film program. Did I uncover any hidden gems that somehow had escaped the big boys? In all honesty, I can’t say that I did. My favorite flick turned out to be Anne Sewitsky’s Happy, Happy, a Thomas Vinterberg-style sexual roundelay interspersed with Wes Anderson-like interludes that was Norway’s Oscar entry, and which deservedly won the World Cinema Jury award at Sundance – in 2011. On the doc side, Sande Zeig’s Apache 8, about the White Mountain Apache Tribe’s legendary all-female firefighting crew, turned out to be a pleasant surprise, but probably only to me as the film had already received a national broadcast on PBS. (Zeig’s TV-length documentary was preceded by Virginia Frobe’s We Are Not Extinct, an unimpressive featurette about the Sinix’t tribe, wrongly declared extinct by the Canadian government. An elderly host introduced Frobe’s doc, unfortunately adding, “We’ll have a Q&A after we are extinct.” To which the silver-haired crowd responded with a raucous, “No!”)

Which isn’t to say there weren’t many buzzed about films – just that I picked the wrong ones to see, like Israeli director Yossi Madmony’s Restoration (which screened last year’s Sundance and which I missed at the Karlovy Vary Int’l Film Festival). Madmony’s slow-moving tale of a wood restorer, his son, and a hired hand who wants to be his son, is so in love with its distractingly grand cinematography and production design that it oftentimes feels like an Armani ad directed by the film’s DP. (No wonder the visual-centric Czechs adored it.) And as much as I wanted to love docs like Joshua Tickell and Rebecca Harrell Tickell’s The Big Fix, about the fallout from the BP oil spill, or Anthony Baxter’s You’ve Been Trumped, which certainly takes the prize for most unusual subject in its casting of Donald Trump as environmental rapist of Scottish land, they couldn’t hold a candle to the many nonfiction flicks that spoil me every year at IDFA. Then again, staid and insular Amsterdam is as far away from open and friendly Sedona as one can get. When even the proprietor of a New aAe store exclaims, “I wanted to see the Sorvino movie – I heard people were walking out!” you know you’re playing to one heck of an enthusiastic crowd.