WHAT IF EMAIL WERE INVENTED TODAY? 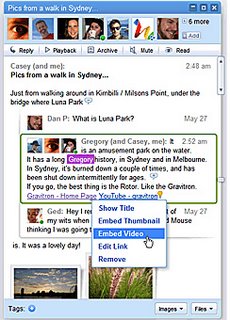 That’s the question two developers from Google, Lars and Jens Rasumussen (creators of Google Maps) asked themselves, and their answer is Google Wave, the one-hour, twenty-minute demo of which is generating talk all over the web. The first 38 minutes are the meat of the demo, and if you want to see the near-future of web communication, check it out. In brief, Wave is an open source protocol that rolls email, chat, blog publishing, forums, photo sharing, wiki contributing and document collaboration into a single “shared object” that is accessed through the browser. Blogger Andy Wibbels says “Google Wave completely obliterates business models and entire verticals of companies left and right,” and IT Blogwatch has a round-up of other responses. Fast Company’s Chris Dannen is “terrified” of the service, calling it a “social trainwreck waiting to happen,” while Mike Elgan at Computerworld decries its move away from “linearity.” He writes, “The other major problem with Wave is its generous contribution to the larger problem of over complexity and information overload. There is so much going on here that Wave fights against the quest for clarity, simplicity and minimalism – the qualities that made Google famous.” MG Siegler at Techcrunch has the best piece that actually details all the things that Google Wave can do, and he concludes:

It’s a really interesting concept, one that you really do need to see in action. It’s ambitious as hell — which we love — but that also leaves it open to the possibility of it falling on its face. But that’s how great products are born. And the potential reward is huge if Google has its way as the ringleader of the complete transition to our digital lives on the web.

I watched the demo, thought it seemed pretty amazing, immediately started thinking of the various ways I can use it to create collaborative docs and projects and also how it can work with the Filmmaker blog, and I signed up to be alerted when it goes out in beta. You can too right here.

Here is an interview with the creators and their demo is below.