“THE KID WITH A BIKE” DELIVERS

The latest film by the exceptional Belgian brothers Jean-Pierre and Luc Dardenne is their most integrated, and arguably their finest achievement. Its visuals are airier, its sound richer, in part on account of the atypical inclusion of music (chords from Beethoven’s ethereal piano concerto Adagio un Poco Mosso).

The film was originally called Deliver Me!, a title which could apply to any of their projects. Redemption is a constant in their work—not redemption of the heavy-handed sort, or payoff for introspection and devotion, but salvation intricately bound up with those on the margins, proletarians who are neither intellectually gifted nor spiritually inclined. The Dardennes shoot their films amidst the unappealing landscapes in which these simple folks grapple not with existential crises but with the more banal occurrences of the quotidian.

Deliver Me! was retitled The Kid With a Bike. The new name might seem a soft-pedaling of its lofty themes, even a marketing ploy, but, whether conscious or not, the new title is a brilliant choice. The deceptively simple plot revolves around Cyril (first-timer Thomas Doret), a solitary 12-year-old boy in foster care, who looks obsessively for the father (Dardenne regular Jérémie Renier) who had coldly abandoned him, and for the much-loved bicycle that disappeared with him. The search for clues to the whereabouts of man and machine moves the first half of the film along. It turns out that Cyril’s father, who has built a new life with a new family, wants nothing to do with the kid, or in fact anyone from his earlier life. 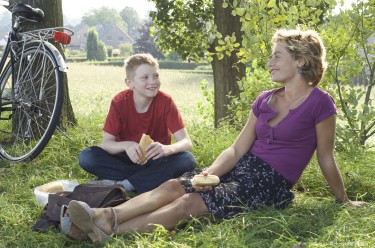 A hyperactive, unfocused boy, who appears empty-headed, Cyril most likely suffers from attention deficit disorder. He lacks any life outside of his beloved bike. With the help of a kind hairdresser, Samantha (the outstanding Belgian-born actress Cécile de France), he meets by chance in a doctor’s waiting room, he gets back his prize possession. (For motives intentionally left unexplained, she buys it from a delinquent who had purchased it from Thomas’s shameless father.) Once it is in his possession, he rides, rides some more, and just keeps on riding, incessantly. The line between him and the bike is blurred. It is as if he doesn’t fully exist without it.

Bruno Bettelheim wrote in 1959 about a nine-year-old boy, Joey (aka The Mechanical Boy), whose autism manifested itself in the delusion that he was a machine. His movements were mechanical, not human, as were, in his mind, his body and everything around him.  A machine world replaced the human when it became too painful for him to endure. Bettelheim maintained that such an illusory worldview is usually the byproduct of a broken home and accompanying feelings of rejection. Cyril fits this model, a classic of psychoanalysis, like a glove.

Samantha is like the godmother in a fairy tale. In many ways, in fact, the film is structured like a fairy tale. To keep his bike from being pinched, Thomas encounters some nasty young lowlifes. He crosses paths with other unsavory characters, like a slick young poseur from the local projects, a drug dealer who cons the impressionable boy (who, chameleon-like, takes on the personalities of those around him) into beating, then robbing the local newsvendor, tossing the youth aside when he is no longer useful; and the vendor’s tough teen son, whose unchecked need for revenge causes Thomas to nearly fall to his death.

The film’s locations, otherwise unremarkable, are laid out as if in the service of a fairy tale. Thomas’s unadorned foster facility and Samantha’s modest home (where he spends weekends) are right in the heart of the city (the Belgian town of Seraing). In those locales he has a modicum of support from others, if not the love he craves. But all of the nasty acts take place in the adjacent forest, a large patch of land that could have been the set for a production of Hansel and Gretel. Here is where he has his nasty encounters and executes his acts of aggression.

Besides not elaborating on Samantha’s motives for taking Thomas in, the Dardennes divulge little about her. Why does she choose this difficult boy over her boyfriend, and why does she allow him to run all over her time and again? Explanations and emotional responses are not Dardenne priorities. It is enough to recognize that Samantha has the patience of Job, and that, probably due to the unconditional affection she offers, Thomas begins to behave and to refrain from manipulating her and everyone else. She has, with kindness and compassion rather than force and punishment, reined him in. He is delivered.