THE VIEW FROM THE 10TH ROW 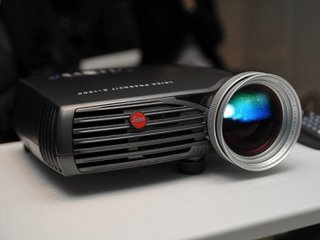 Interesting article in The Guardian this week about Tied to a Chair filmmakers Michael Bergmann and Doug Underdahl who obtained a Leica Pradovit D-1200, built a tenth-row rig at New Jersey’s Washington Theater and projected their film off their laptop.

The picture on the ageing silver screen in front of us is unquestionably of theatrical quality. The independent film-makers Michael Bergmann and Doug Underdahl move around, checking from all angles. It is, as Bergmann has warned, different: not film’s luminous grain nor video’s harsh flatness. This digital image is thrown by a high-end Leica business projector powered by … a Macbook Pro running QuickTime Pro. Two emissaries from Leica’s nearby US headquarters seem stunned. They had no idea their projector could throw a 1920×1080 image 100 feet at 24 frames per second in this quality. For comparison, Bergmann slips in an ordinary DVD. We all agree – ugh.

Bergmann’s latest film, Tied to a Chair, for which Underdahl was director of photography, and which recently won the best in festival prize at the Heart of England International Film festival, is caught in two traps, like many independent films. First: the transition from film to digital. Second: shrinking distribution for independent and art films. Bergmann’s movie has been digitally produced but the Washington theatre in New Jersey, which wants to show it, only has film projectors. Buying a digital projector costs $60,000 (£37,000). A good 35mm transfer about the same. Neither film-maker nor cinema can afford it.

The article goes on to discuss the costs of the Digital Cinema Initiative specs that mainstream movie theaters are adopting and how various filmmakers are working around them using lower-cost solutions like the Leica, which was intended primarily for business slide presentations.