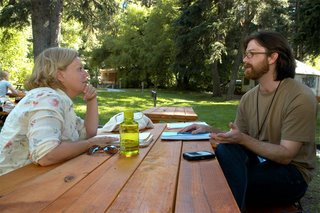 When last we met, I was on my way to the Sundance Creative Producing Lab to answer a few pressing questions about my upcoming project, The Skeleton Twins, as well as creative producing in general.

The Lab was an amazing experience, not only on the level of the exchange of information (which was a veritable fire hose) but also, and at least as importantly on the depth of the conversation in which we engaged together. It is one thing to swap war stories over a beer and and entirely different thing to spend four days, for ten hours a day, sitting around a table with the same people, drilling deep into the most interesting and troubling questions we’re all facing as independent producers in the toughest and most dynamic landscape for feature film finance, production and distribution we’ve practically ever seen. And also, to raise candid questions about how we’re supposed to survive and indeed, carry on making content, in a distribution landscape that is more cash-strapped and fragmented than ever.

In my prior blog post, I posed a few key questions that were on my mind as I went into the Producing Lab. I hereby report back to you with my answers.

• What are the best ways of financing an independent film in this rough economy? The answer to this question has a couple of parts. During one extraordinary afternoon session, advisors led us through the process of assessing both what a film “can cost” and what that film “should cost.”

Arriving at the former number is straightforward: either you have the skill set yourself to do so or you hire an experienced line producer, but in any case, you make a calculation as to what the film would cost to make. You’ll end up with a “high” estimate as well as a “low” estimate, wherein without compromising any of the key creative elements that make the movie what it most essentially is, you crunch the budget as far as possible.

What a film “should cost” is more complex and is made up of a few components. The goal is to find the maximum number of ways possible to minimize the equity exposure in relation to the total budget. The first way is soft money, of whatever variety (state tax incentives, grants, or if applicable, foreign state monies).

Second, through relationships with foreign sales agents, you can get estimates as to the expected value of the film in various territories around the world. Sales agents will normally provide both a high and low estimate. If you calculate on the conservative side (perhaps anticipating 50% of the low-end estimate), you have an additional way of lowering the anticipated equity risk.

But then, whatever equity investment remains “uncovered” will have to be addressed either through an outright domestic sale to a single distributor or through the division of various rights with theatrical hanging out there as a potential loss-leading marketing campaign.

In the present market, the idea is to be as realistic and conservative as possible. As independent filmmakers, we bring great value to both financiers and distributors in the creativity with which we can achieve terrific results for very little money — this is our “killer app,” as it were. At least for the time being, we have to be smart about how much equity we expose on each production, because in these cash-strapped times, the producers who can make a return on investment are the ones who will be financed in the future.

• How do presales and debt financing work? When you “presell” a film, you are embarking on a two-step process. First, you are presenting a package (consisting in the script, the director and any attached cast) to a foreign sales agent, who will assess its anticipated market value and deliver high and low estimates. Time was, you might be able to secure a loan against merely these estimates, but at this point, the economy is rough enough that you will have to actually carry out presales in specific territories on a low-budget film. And without enormous stars in it with an established director, there is little chance of this.

My take-away was that unless the film has huge stars in it who will have appreciable value overseas, the best bet is simply to try to calculate a discounted foreign sales number into your financial model when you’re trying to figure out how you’re going to cover your equity. And then focus on a combination of soft money sources and equity to physically finance production.

• Are there financially realistic means of distribution outside the accepted framework? If so, what are they?

There are indeed, and too many to enumerate here. But the basic rap is that you should raise a budget for a P&A spend at the same time that you’re financing the production of your film, so you are not caught with your pants down if an acceptable distribution offer doesn’t come through. There are many ways of using the P&A spend, but the bottom line is that you’re trying to have the biggest PR bang possible (at this time, most likely with a theatrical release), which can then enhance the ancillary and foreign sales value of your film. In one self-release case study we heard, the filmmakers lost a little money on theatrical, but recouped not only the outstanding P&A investment, but also their production costs, with ancillary sales.

• How shall we best sustain ourselves as independent filmmakers without either losing our shirts or selling out (i.e., doing something that prevents us from continuing as independent producers)? This is where we have to have a sense of humor. Producing independent film is about passion, primarily — we’re not doing this to get rich, particularly, but because we so deeply believe in the projects we’re making. However, there is comfort to be derived from the fact that certain aspects of it seem to get easier as one advances in one’s career and the nature of the struggle at the beginning will not necessarily be the nature of the struggle later on. All the producers who advised us have managed to be fiscally solvent for a long time doing nothing but making movies, and there are as many ways of achieving this goal as there are producers in the world. One theme resonated throughout, however: keep your overhead low. Don’t keep an expensive apartment, avoid fancy dinners, treat production as “vacation” if you can think of it that way. In a rough economy, frugality is freedom and money equals time in which to carry your long-term projects forward.

Wow, that’s a big brain-dump. I left the Lab feeling more hopeful than ever for The Skeleton Twins, both because of all the information I took in and the tremendous charge of inspiration I got from both the advisors and the other fellows. I cannot wait to embark on the next steps.

These are only the beginnings of notes on all that I learned and took in while at Sundance, but hopefully they’re helpful for you all. These are only my interpretations of what I took in and the best way to answer these questions is for yourself, by taking advantage of the enormous resources at our collective disposal. Read Filmmaker Magazine, read blogs, talk to your fellow filmmakers. In tough times, we are our own best friends and advocates.