THE ADRIENNE SHELLY MEMORIAL GARDEN OPENS IN THE WEST VILLAGE 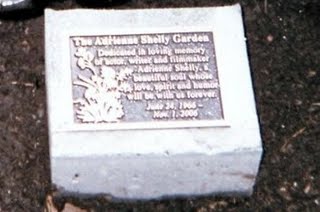 Earlier this month a memorial garden dedicated to the life and work of director and actress Adrienne Shelly was unveiled in Manhattan’s West Village. Filmmaker intern Melissa Silvestri was there for the opening and files this report.

Nearly three years ago this November, actress/writer/director Adrienne Shelly’s life was cut short by a brutal act of violence. Her unique and indelible spirit is sorely missed, as evidenced by her most recent film, Waitress, which she wrote, directed, and co-starred in as the shy but sweet waitress named Dawn, looking for love. Since then, her husband, Andrew Ostroy, has carried on his late wife’s work, through founding the Adrienne Shelly Foundation, a non-profit organization that gives support to emerging women filmmakers, and produced her script Serious Moonlight, a film starring Meg Ryan, directed by her Waitress co-star Cheryl Hines, and will be released in December.

Thanks to the efforts of Ostroy and Shelly’s friends, a memorial garden honoring Shelly was unveiled on Monday, August 3rd, in Abington Square Park in Greenwich Village, where Shelly lived and worked, creating her films and raising her daughter Sophie with Ostroy.

At 9:45 am, the park quickly filled with many of Shelly’s family, friends, and colleagues, including film professionals Hal Hartley, Kevin Corrigan, and Paul Rudd. Even if one did not know Shelly, they could still feel touched and moved by the effect that she had on people. I myself was introduced to her via her 1990 film Trust, having found a video copy while working as a volunteer at the Cinema Arts Centre in Huntington, N.Y. in 1999. As the world-weary pregnant teenager Maria, Shelly projected this intriguing combination of innocence and street smarts, somebody who didn’t trust the world yet still believed in love and kindness. That spirit of love, humor, and beauty made everybody want to know her, and she had an immeasureable effect on many lives.

At 10 am, Ostroy delivered a heartfelt speech honoring Shelly as a “loving daughter, sister, and a deeply devoted friend,” with a “brilliant, unique voice that will live on.” He continued to say that “what comes out of horror can come positive things,” as the Adrienne Shelly Foundation was created with Shelly’s intention to give women filmmakers the same advantages and opportunities that she worked for and enjoyed in life. Choosing the garden for her memorial was “quite fitting,” as it was a place she admired, in her neighborhood home, and where she directed her film I’ll Take You There in 1999.

Through her foundation, Shelly’s influence and lifelong passion for films will give so much to aspiring filmmakers, a role model to be truly admired and respected. She was a truly beautiful human being, who was not only special to her friends and family, but influenced many who watched her films, knowing that she was an underrated and deeply talented artist, who understood the artistry of filmmaking and gave back to encourage other women to follow their dreams and passions in their life’s work. Her spirit will live on through the foundation, her films, her loved ones, and in her young daughter, Sophie. — Melissa Silvestri