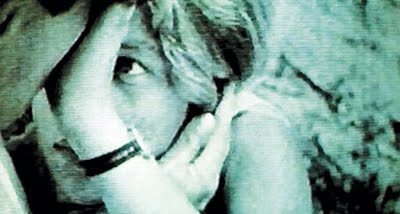 Glowing phantoms of days and films past haunted the fifth Wavelengths avant-garde film program at this year’s Toronto International Film Festival, a series of meditations in which, as film programmer Andréa Picard described, “personal expressions of historical and collective memory confront spectres from the past.” Une Catastrophe (pictured), Jean-Luc Godard’s trailer for the Viennale is a companion piece of sorts to the Alonso BIFICI trailer that screened the night before. At once forward-looking and nostalgic (it excerpts and pays homage to Sergei Eistenstein‘s Battleship Potemkin, among other films) Godard’s piece is happily available online here.

Apichatpong Weerasethakul, the Thai director whose work includes the miraculous exploration of memory and personal history that is Syndromes and a Century (2006), showed A Letter to Uncle Boonmee, one part of an ambitious multi-platform project called Primitive. Another piece of this puzzle is available to view online here. The film’s location is key to its significance: Nabua is a Thai border town where fatal confrontation between Communist farmers and the army took place in 1965. This attempt to probe and engage with the past functions in concert with films including John Gianvito’s extraordinary Profit motive and the whispering wind (2007) and What Remains (2005), Steve Cantor‘s documentary about photographer Sally Mann as she tries to photograph the soul of a location. Can a field have memory or meaning? What if it’s a battleground that was once soaked in blood, a site where lives were lost and bodies buried?

Brooklyn filmmaker David Gatten’s Film for Invisible Ink, Case No. 142: Abbreviation for Dead Winter from his Invisible Ink (Diminished by 1,794) is a physical abstraction of text from Charles Darwin’s On the Origin of Species, a cinematic rumination of the absence of words. Like Errol Morris elegantly illustrated using a photograph of the Lusitania as his case study, it is impossible to know the specific import of this film without context. No background information is necessary, however, to appreciate its glittering, flickering kaleidoscopic aesthetic. It’s like seeing tree branches through dying eyes.

Marina Gioti credits herself not as director but as “Finder, Keeper, Commentator” of and on the film The Secret School, an old black-and-white educational film that teaches its audience the importance of nationalistic instruction that took place in underground Greek schools under the auspices of the Greek Orthodox Church during the reign of the Turkish Ottoman empire. Gioti disputes this teaching with a series of witty intertitles, undercutting the film by questioning the veracity of the schools’ existence and analyzing the importance of nationalistic mythology in patriotism. “This is a film I got from a junkyard for 10 Euros,” she explained to the audience after the screening. “Though I don’t know if I found it or it found me.” When the issue of copyright was raised by a curious viewer, as often happens when discussing films that employ found footage, Gioti was magnanimous: “If there’s ever a problem, I can always give the 10 Euros back.”

Le Streghe, femmes entre elles, a new work by Jean Marie Straub, is the French director’s second film based on Cesare Pavese’s Dialogues with Leucò, an out-of-print volume that gets new life in Straub’s cinematic adaptations. Reclining in a lush fairytale forest, Circe (Giovanna Daddi) discusses her feelings for Odysseus with fellow goddess Leucò (Giovanna Giuliani). Spoken in Italian, subtitled in French, and soft-titled with video-projected English for this screening, the conversation between two women is both a meditation on the nature of mortality and the slumber party whispers of best friends as they dish about cute boys. Listening to Circe’s ruminations about her time with Odysseus, Leucó reflects, “You didn’t turn him into a boar or a wolf. You turned him into a memory.”