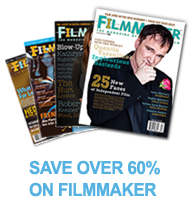 Please forgive this commercial interruption, but we’re in the final three days of our Filmmaker magazine Stimulus Plan, our annual subscription drive, and I hope that if you have not already taken advantage of this offer that you’ll consider doing so. It’s a fantastic deal, offering not only a year of Filmmaker for only $10 but also our digital edition (which contains all back issues through 2005) free. The offer runs until September 24. Below is the note I posted in our newsletter a few weeks ago detailing the offer in a bit more detail. And for those who have subscribed, thanks for your support.

With all the talk about the government stimulus plan, the recessionary economy, and green shoots, we at Filmmaker decided to create our own kind of stimulus plan, one that’s not about the macro economy (although film is an economic engine) but rather your own creativity and artistic livelihood. In each issue of Filmmaker we strive to bring you practical information on how to make movies, how to think creatively about the movies you want to make, and how to survive as an artist while doing so. In recent issues we’ve had a continuing series of articles by documentary filmmaker Esther B. Robinson on filmmaking, personal finance, and the recession, and we’ve had Lance Weiler’s column, Culture Hacker, in which he charts the technological, business and creative innovations that are reshaping moviemaking as we know it. We’ve had Quentin Tarantino on sustaining a long career and our pick of 25 New Faces of filmmakers who are just beginning theirs. And we’ve had a lot on DIY distribution, a topic we’ll continue to focus on intently, striving to bring you not only inspirational tales of filmmakers doing it on their own but also the practical details on the results of their efforts.

From now until September 24, we’re offering a great deal for Filmmaker Magazine that will enable you to take all this information and stimulate our own creativity. We’re discounting the price of a one-year magazine subscription from $18 to $10. Two years goes from $30 to $18. And, as a very, very special bonus, all subscriptions received during this period will be bundled with the Filmmaker digital edition at no additional charge. In addition to the print magazine you’ll get a digital version of each issue — and, access to all back issues through 2005. That’s over 20 issues of Filmmaker for only $10.

As you all know, this is a challenging time for magazines as well as independent film. The recession has hit hard, and business models are changing. With Filmmakermagazine.com, our digital edition, our revamped message boards, and more new things coming soon, we are trying to not only change with the times but also keep pace with what I believe is a real renaissance in the American independent film movement. So, whether you read Filmmaker in print or online, supporting us by subscribing assists us in covering more films, filmmakers, and issues relevant to the film community. If you are not a subscriber I hope you’ll check out the Filmmaker Stimulus Plan and become one.