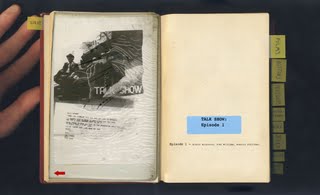 I’ve been posting links to stuff I’ve found around the web mostly on our Twitter feed these days, but this deserves its own blog post: Red Bucket Films, the home of filmmakers Josh and Benny Safdie as well as Brett Jutkiewicz, Alex Kalman, Sam Lisenco and others, has launched a new version of their website. And it’s not just a design refresh — it’s got a bunch of new stuff on it, including “Talk Show,” four episodes of Red Bucket’s “TV Party”-like downtown interview show. The first guests are filmmaker Ronnie Bronstein, National Scrabble Association’s John D Williams, and musician Rebecca Schiffman There’s other stuff on the site too: a store, where you can buy shorts compilations, artist books, and posters; The Power of Katsu, a film about “scale, New York City and graffiti” by Kalman and Nick Poe; and an expanded “Buttons” section where you can find sublime and quite tiny pieces of cinema. There’s a video game too, called “Haters-Lovers” , which I’ll check out when I have some time.

I was asked on a panel at the Woodstock Film Festival what current work coming from the U.S. independent scene I was sincerely passionate about, and I named Josh Safdie’s The Pleasure of Being Robbed and Josh and Benny’s Go Get Some Rosemary. You’ve read about these films and filmmakers before at Filmmaker and on this site, but if you haven’t been paying attention, click on the links above and start exploring.