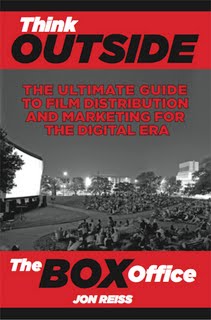 Thanks to everyone who came out tonight for the first in our series, “A New World: A User’s Guide for Filmmakers and Audiences” at the IFC Center. The speaker was Jon Reiss, who gave listeners an accelerated yet detailed overview of his thoughts on DIY distribution and what a theatrical release means today. (Some of these thoughts can be found in this article in Filmmaker.)

There was a lot to take away, but here are a couple of things that impressed themselves on me.

1. During the development of your project, think of five specific audiences your film will appeal to. Jon said that too many people think of their audiences too broadly, like, “I think my film will appeal to women between the ages of 25 to 45.” That’s a demographic, not an audience. You have to be a lot more specific because that specificity is what enables you to tap into a niche audience that will mobilize itself around your film. Jon said that Valentino director Matt Tyrnauer was surprised to discover that women’s sewing groups were buying blocks of tickets for his doc on the great fashion designer.

The trick, then, becomes not just identifying those niches early on but — and this is my addition — developing your film so that these potential niches are motivated to rally around it. This doesn’t mean pandering to an audience — it means making sure that you present your subject matters in fresh, original, and deep ways so as to inspire those naturally predisposed to them.

2. Prioritize among the four goals for a feature filmmaker. Jon discussed the four things a filmmaker might hope to get from their film. The first is furthering of his or her career. This could come in the form of a development deal, an agent, a studio assignment, financing of a second film, etc. The second is money. The third is to get your film seen, to communicate and reach people. The fourth is to change the world, or to advance a particular social or political message. (He also spun out two or three others, including becoming famous, developing a long-term fan base and demonstrating green practices.) What was interesting to me was his simple declaration that all of these goals could not be aspired towards in the same proportions. A filmmaker has to clearly prioritize which of these is most important to him or her and guide his expectations accordingly.

Jon’s book, Think Outside the Box (Office), has just been released, and you can buy it from him with a special 12% discount courtesy of Filmmaker by clicking on the link below.

To Order Think Outside the Box Office with 12% Off and Bonus Gifts – Click Here!