UP IN THE AIR’s JASON REITMAN ON OUR LAYOFF ECONOMY 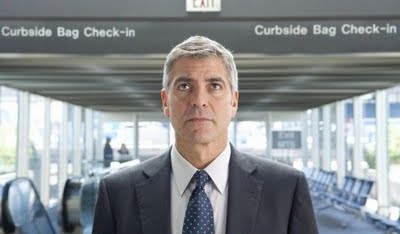 Although as I write this its Tomatometer is at 89%, Jason Reitman’s Up in the Air is something of a Rorschach test for critics, with some finding the film to be both canny and empathetic, a Hollywood picture calibrated for the emotional temperature of a country with a 10% unemployment rate. Others see its Hollywood sheen and evocation of the family as obviating the economic reality it is set against. (J. Hoberman of the Village Voice writes: “… a satire unsullied by anger, Up in the Air floats above the pain.”

I am solidly in the “pro” camp, feeling that Reitman has worked within the Hollywood style to create a nuanced, often quite melancholy, and far from facile portrait of numbed America. Here is an excerpt of my interview with Reitman that appears in the current issue of Filmmaker.

FILMMAKER: I imagine this movie plays differently now than when you made it, because obviously more and more people have been fired in the last year.

REITMAN: Well, yes. I started writing it at the tail end of an economic boom, and that has changed. When I started writing it, I wrote those [lay-off scenes] as satirical. Things really changed for me when we went to St. Louis and Detroit — we happened to be shooting in two cities that were hit hardest by the economy. Suddenly you could feel the sense, unlike Los Angeles, of so many people who have lost the same job, and there’s nowhere to go. And the more I talked to people, the more I understood: No, it’s not about just maybe changing a gig or looking at a new company. It’s like your choices are: Are you going to move to a new city? Are you completely changing industries? Are you going to start from scratch at 50 years old? I mean, the kind of unthinkable things that no one should have to face, let alone hundreds of thousands of people. So all the people who lost their jobs in the movie were people who actually lost their jobs, and that [casting decision] did many things at once. Most selfishly, it brought a lot of authenticity. What was crazy to me as a guy who for a living tries to get people to be honest on film and who works with professionals at the height of their game, is that all these people just — [Reitman snaps his fingers]. The second we started talking they forgot about the camera and started saying the kind of things that you can’t write. I’m proud of the fact that we put a face to something that is otherwise just a number. It’s impossible to really understand the scale of how many people have lost their jobs.

FILMMAKER: I feel your film walks a line between being somewhat unsentimental about the topic of lay-offs while also containing more heartfelt moments. But did you feel the need or the pressure to offer more hope for those hurt by the economy?

REITMAN: No, I don’t want to make social agenda films. There are enough directors doing that, and that’s not really what’s in my heart. You know, to a certain extent I’m a fairly cold libertarian. I think Thank You for Smoking kind of explored it best for me in that I’m this weird mix: I’m a libertarian guy, but I have a big heart, and they’re constantly butting heads. And Thank You for Smoking for me was my movie dedicated to the fact that I can’t somehow make amends with the fact that I have a heart, I want to help people, and simultaneously I believe, you know, in the Darwinian sense of life. And so I guess I approached this with the same way I approached Juno, with teenage pregnancy, and with the cigarette issue, which is I want to have as honest an approach as possible. I think that’s what makes—hopefully makes—my film different. I mean, hopefully, that’s what makes Thank You for Smoking different from The Insider, and that’s what makes Juno different than an after-school special, or any other film about teenage pregnancy. And that’s what’ll make Up in the Air different from, you know, the Michael Moore film. Even though I’m a fan of Michael Moore, and I really love what he does. But it’s just not my agenda.