Elles — A Hammer to Nail Review

by Susanna Locascio
in Columns, Filmmaking
on Apr 26, 2012

Elles is being distributed by Kino Lorber and opens theatrically in NYC and LA on April 27, 2012. Visit the film’s official website to learn more.

In Elles, the new film by Polish director Malgorzata Szumowska, Juliette Binoche plays a journalist writing an article for French Elle on young women who finance their education (and more realistically, their apartments, clothing, and lifestyles) through prostitution. But forget the pimps and hookers of the movie underworld. The world in Elles isn’t one of coercion or strung out desperation, but of choices. It’s softcore social criticism, far less interested in systemic injustice than in the strange forces that move women to desire, and to vastly different ends. The question of exploitation remains, imposed on the young prostitutes, and also on Binoche’s upper-class heroine in subtler form: what are we willing to trade for the life that we want? In a Dominique Strauss-Kahn world, how do women understand the relationship between power and desire? Elles dares to pose an emotional but unsentimental answer to these questions, distantly styled along the lines of Michael Haneke or Lars von Trier (whom both Szumowska and producer Marianne Slot have worked with). The resulting film is carefully paced and contemplative, and, yes, revealing enough to earn its stateside NC-17 rating. Lovely as the young women are, that shouldn’t be what draws an audience, since the sex is work, and far from erotic (mostly rote, at times humiliating). In the presence of men, it’s money that turns them on. Binoche’s Anne also pays by the hour, but for precisely the opposite experience. While the prostitutes’ clients want anonymous carnality, to detach personality from the women and sexual act(s) they want performed, Anne wants only the human and specific, to know them and their stories. In the end, the film belongs to Binoche, whose immersion in the prostitutes’ world begins to refract her own desires, and flush her with a quivering, angry grief that she barely understands. With all this talk of girls lately, I prefer the women of Elles, and their sharp honest take on female friendship and sexuality. 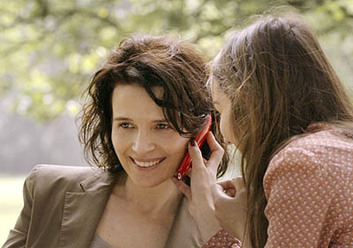 Szumowska and writer Tine Byrckel were loosely inspired by Virginia Woolf’s Mrs. Dalloway as well as documentary interviews with prostitutes, and Elles is accordingly framed around Anne as she finishes her article while also preparing for a dinner party. Much of the film is made up of extensive flashbacks to Anne’s interviews with two women, the lusty Polish Alicja (Joanna Kulig) and the more fragile Charlotte (Anaïs Demoustier). She meets with Charlotte (“Lola”) in a sun-dappled park, where the lithe, freckled brunette could be any other university student. Charlotte uses a fast-food job as a cover for her parents and boyfriend, but in truth she found that work tiresome and underpaid. She placed an ad on the internet, received over fifty emails in reply, and, well, c’est la vie. The money is her lift out of the working class, and into university and a life like Anne’s, of which Charlotte seems envious. Alicja is a wilder creature, all yell and song where Charlotte is demure and daughterly. Anne pretends to be a client to get an appointment, and at first Alicja slams the door in the reporter’s face. Though Alicja eventually lets Anne in for a price, she remains cagey, insisting that Anne drink vodka with her. She has an almost feral instinct for Anne’s frigidity, and it isn’t until Anne is somewhat disarmed that Alicja is willing to share more of herself. Of the two young women, Alicja is the more adept at transaction, giving nothing for free. She arrived in Paris to study at the university, but things quickly took a hard turn; she was propositioned by her supposed landlord, her things were stolen. While there’s little help to be had from her mother back in Poland or the university bureaucrats, men circle her like hungry wolves. She’s a quick study, soon making enough to afford a nice apartment, and a built-in closet filled with clothes.

Several reviews of Elles have been prickly, calling it smug. In contrast, I found it layered, baffling, and complex. It’s a film about boundaries, which applies as much to sex as the wavering divide between subject and author. While it’s true that men get little sympathy here, the prostitutes are candid and relatively blithe about their choices, complicating the idea that they are victims. Instead, it’s the uncomprehending Anne who begins to suffer. Szumowska wisely dims Binoche’s luminous qualities, positioning Anne as a harried housewife beating her wings against her gilded cage (or the bourgeois Parisian version, a beautifully aged apartment with impeccable white walls, high ceilings, and shelves filled with books). She is lonely in a house of men, and as her sons and husband orbit around her, demanding meals and the domestic organization that always seems to fall to women, a slow tide of anger and despair rises in her. She smokes with quiet ferocity, the habit mirroring the strange, sad pull of desire that battles with her disgust. Simply put, Anne is somewhat undone by what she learns from Charlotte and Alicja, filled with a hollow, aching grief. Her husband comes off as badly as husbands often do in French films of upper-crust discontent—he’s dismissive, calling her moodiness and anger “weird.” God forbid it compromises the meal she must cook—while working under deadline—for dinner with his boss. She pointedly chooses to make the suggestively titled coq au vin, a secret homage to her young confidantes, which the men lap up with delight.

If Elles bridges this vast, deceitful distance between what the men desire and the women want, it’s tenuous at best. There isn’t much probing as to why compulsions drive them, but there’s plenty of fallout to consider. What seems most disturbing to Anne is not necessarily that the young women sell their bodies, but the ease with which they are reduced and flattened to a single function. In his poem A Prayer For My Daughter, W.B. Yeats is fearful for his sleeping child, still innocent. He prays, “May she be granted beauty and yet not / Beauty to make a stranger’s eye distraught.” But he is also fearful of the dizzying internal terrain he doesn’t understand: “It’s certain that fine women eat / A crazy salad with their meat.” Elles, which is notably female-driven from script to screen, richly explores this landscape of desire.