Eric Austin of HeliVideo has been flying RC aircraft and helicopters for about ten years, but it was two years ago that he first put a DSLR camera on a helicopter and started shooting aerial footage. Two years on and his company is shooting material for the Discovery Channel, ABC and others, primarily using the Sony NEX-FS100.

How did you get into the R/C Helicopter/Camera business?
I’ve always been an amateur videographer/photographer, but it wasn’t my primary line of business. I had experience editing and everything, but I actually was a global account manager selling printed circuit board fabrication out of Asia.

About ten years ago I was really into RC aircraft, and I spent about three years learning every aspect of flying helicopters and airplanes. It’s really difficult to learn, especially the helicopters. And when you’re putting a big camera on the front, it’s just a whole other level, so it’s super tough to get into at that level, just because of how much dedication it takes to fly. 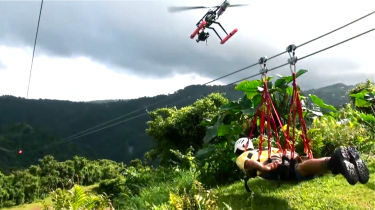 When did it become a business?
This kind of blew up with the DSLR revolution back in early 2010. I told a friend here in Austin, a d.p., that I was thinking of starting a low-altitude business with RC helicopters and asked what camera he would recommend. He said there was this brand new camera called the Canon 7D, so that’s where it started.

How was the 7D to work with?
I was one of the first to put the 7D on an RC helicopter and it just went viral from there and a new business was created. Of course, it was a little painful; you know how hard it is to just walk and shoot with a 7D. It’s really hard to fly with it too, due to the rolling shutter and other things that just make a DSLR harder to shoot on.

What other cameras have you used?
After that, the Panasonic AG-AF100 came out. We immediately switched to that for the 1080 60p. We only used that for a few months until the Sony NEX-FS100 came out, and that’s been our primary camera up until today.

Once we check out the Sony NEX-FS700, we’re sure that’s going to be our new camera. We’re super excited about the new Sony.

Why did you go to the NEX-FS100 from the AG-AF100?
There’s a couple of reasons. One, I always was a Sony guy. I have had a lot of Sony cameras so I was really familiar with the Sony menu, and also the profile of the camera was a much better match.

The height of the AG-AF100 meant we had to do go in and take off the LCD viewfinder, and it’s really tricky to get in there and get that off. It’s just so tall that it was hard to get it in the mount and have the full range [of movement]. The Sony was a little lighter, more advanced, with the 35mm sensor instead of the 4/3rds sensor.

A lot of the TV shows we go on are shot on the PMW-F3 or the Alexa, and it just matches perfectly to those cameras.

It is kind of a natural thing that we keep switching cameras to try to find which one is working best.

What sort of material are you shooting?
We mainly shoot TV commercial’s and TV shows. We just did a big network show for ABC Studios/Disney called The River; we were a big part of shooting aerials on that.

Right now we are using a traditional, single rotor-style helicopter. It has a three-axis camera mount up front; it’s fully electric, runs off battery so it’s really quiet, clean, and it weighs just under 25 lbs in the air with the camera loaded up. It has a flight duration of about seven-to-eight minutes. 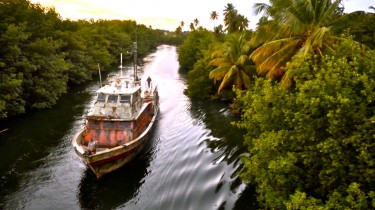 How is this all operated?
I fly the helicopter. We have a secondary guy who looks at the live downlink from the camera; we take an SD out of the camera and then beam that down to a ground station. We have director’s monitors we can hand out so they are also seeing the live shot. Then the director can always say, “Come around, do that again, or a little lower, higher, faster.”

Coming up, there’s a new wave of multi-rotor aircraft which are completely different from the helicopter that we fly. They have four, six, or eight smaller propellers on motors, and the craft are more circular in shape. They are much more stable than a traditional helicopter, but they have their own issues because they don’t handle the wind as well and they don’t quite have the flight range that the big helicopter has right now. As far as carrying capacity and lifting heavier cameras, when you get into a Scarlet or a RED EPIC or something like that, it’s really heavy. So the traditional helicopter has much more power and lift.

What are the operating considerations? If someone wants to shoot with this device, can you do it anywhere?
Yes. We’ve traveled virtually around the world. We just got back from shooting in Korea for a Japanese commercial, and we were down in La Paz, Bolivia, earlier this year shooting for Discovery Channel’s Hell Roads. What we do is really intimate stuff. We don’t really replace the big helicopter shots, though we can cross over a little bit.

Really, what we are is for tight aerials, like an infinite-jib look. I’d say normally, 95% of what we do is under 200 feet. We can get up higher and give kind of the look of a big helicopter, but our paths don’t overlap much. You can’t do the out-of-the-clouds shot.