FOUR TRIBECA DOCS: FROM ZEN TO MADNESS TO SEXY

by Stewart Nusbaumer
in Festivals & Events, Filmmaking
on Apr 30, 2012

At 85, Tony Bennett looks and sounds great. In The Zen of Bennett, which premiered at the Tribeca Film Festival and will soon appear on Netflix, Bennett relies on a single word, repeated over and over throughout the documentary, to describe his life philosophy. That word is “quality.” For the clothes he wears, for the songs he sings, for the people who are his friends, for everything, quality is his guiding principle. Conversely, the elderly singer with the smoothest pipes in the business, disparages cheap songs, crude and outlandish behavior, and anger. “Everything you do should be done with love, not with anger.”

Going from Tony Bennett in The Zen of Bennett to Morton Downey, Jr. in Évocateur: The Morton Downey Jr. Movie is like going from a soothing, relaxed discussion in a cinematic sauna to being manhandled out of that sauna and confronted by a raving maniac aiming a flamethrower at your cojones. 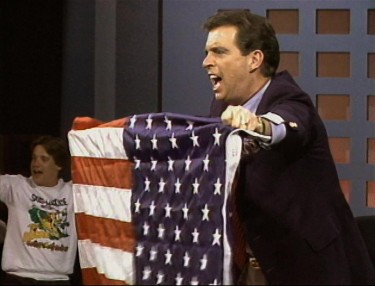 Morton Downey, Jr. had a miraculous rise as a right-wing TV trash-talk host in the 1980s, an ascent that was matched in drama by his stunning collapse at the end of the decade. In the archival footage and interviews with former associates, Downey comes across as a vicious attack dog high on political extremism — or possibly political opportunism, since it’s impossible to know what he really believed, if he believed anything beyond his self-promotion.

Unjoo Moon’s The Zen of Bennett tags along with the gentle crooner as he records a new duets collection – with such greats as Aretha Franklin, opera star Andrea Bocelli in Italy, and Amy Winehouse in London (just before her death). Évocateur, directed by the trio of Seth Kramer, Daniel A. Miller and Jeremy Newberger, jumps into Downey’s shoving matches and nasty name calling. But what fueled this mad man of television? We’re told Downey hated his father and didn’t see his mother, drugs are mentioned, and an intense desire for fame is touched upon.

This is not, however, a film to understand Downey, but to revel in his outrageous behavior. Although both Bennett and Downey are accurately portrayed, neither film digs into their subject. Fine, all films don’t have to break new ground; some can carry us along the surface if that surface is engaging. The Zen of Bennett is smooth and easy, like Bennett, and Evocateur: The Morton Downey Jr. Movie is rough and rugged, like Downey was. And I walked out of one in a delightful, blissful state and the other screaming for some Valium.

Mansome, the latest film from prolific documentary filmmaker Morgan Spurlock, tackles what it means to be a man in the 21st Century, focusing, strangely, on men’s grooming habits. Instead of investigating what men think on a range of issues and examining their behavior over the years, Spurlock looks for the modern male identity in how concerned they are with their appearances.

Two men are interviewed in a spa (we’re told men are now getting as many spa treatments as women, but no evidence is furnished), other men discuss the popularity of shaving their body hair (especially back and chest hair), and still others embrace grooming products to freshen and preserve their bodies, even an antiperspirant for the testicles. The term “metrosexual” is raised, but quickly dropped. Probably not good to use an “old” term for what is supposedly a new phenomena.

And Spurlock presents another viewpoint of men, mostly the opposite. These men are deeply committed to their hair, especially facial hair, with long beards and swirling mustaches. One man is repulsed by even the most basic concept of human hygiene. Other men relish the traditional all-male barber shop and its old fashion male-bonding and would never be caught near a male spa.

To bring some order to this back-and-forth of two male types, inserted are the views of several experts. But this does not deal with the fundamental problem of Mansome. Why divide men into only two groups, and opposites? Why use extremes to tell the story of modern men? 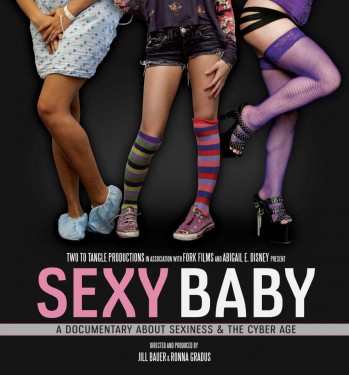 available to all, with women assumed to be as sexually free as men, sexuality seems to be everywhere. True, but the problem with this documentary, again, is representation. Whose voices?

By focusing on these particular women, who are, with the exception of young Winnie, for most of the film, as marginal to the spectrum of American females as Spurlock’s two male categories are to American men generally, Sexy Baby has nothing to say about real cultural change in America. Instead, like Mansome, these are films to amuse, shock, amaze, make us laugh and entertain us (at least some of us), but they fall way short of explaining or illuminating American men, women and our culture.

The Zen of Bennett and Evocateur: The Morton Downey Jr. Movie present straightforward profiles. They are solid, not stellar documentaries about two very different subjects. Mansome and Sexy Baby reach for sociological heights and stumble badly. It’s not unusual that the more modest films end up being the strongest.