BRANDON HARRIS’S MOST OVERLOOKED FILM OF THE YEAR 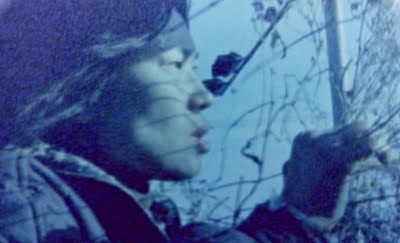 Over at his Cinema Echo Chamber, Brandon Harris extolls on Kim Gok’s Exhausted, a comically desolate whatzit of South Korean underground cinema. Minimalist and bleak but with a certain repetitive humor, Gok’s film had its U.S. premiere at the Syracuse International Film Festival and went on to play Pusan and Rotterdam, where Harris and I both saw it, but has played in few other places. It is not out in the States, can’t be streamed, as Harris notes, and I never remember seeing it at Kim’s before they closed.

From Harris, the plot:

An unnamed pimp and prostitute/girlfriend live and work in a dive apartment where men on the outskirts of a destitute, unnamed, post apocalyptic South Korean city comes to have sadomasochistic sex with the flaccid, semi-retarded woman at the film’s center. They have a domestic routine of sorts, eating cheese sticks and porridge, attempting to fetch new bowls and silverware, taking walks along a dirt and industry strewn beach that inevitably turn into yelling matches and fights. They occasionally go and hang signs that read “We have girl”. These excursions lead, of course, to more chases and hysterics, which play in an madcap outrageous way in Gok’s gauze, wide compositions. Eventually a homely young woman takes notice of the prostitute’s powerlessness and after one of many escape attempts on the part of the whore, rescues her from her provisional refuge among trashed tires on a beach, but she too has intentions for the young woman that prove to be the most degrading and disturbing of all.

The desperate inarticulateness of the characters and the rough and gauzy Super 8mm images make the surroundings seem as threatening for this woman in peril as they did for Monica Vitti in Red Desert, of which this is some sort of perverse remake, another film of sexual malice amidst the ruins of modernity. Yet where the green clad temptress of Antonioni’s filmic universe could find some small salvation in her child, the only children in the land Exhausted share the color of Ms. Vitti’s jackets, one which expresses a small oasis of hope in the cesspool of the industrial West in that film, but only affirms life’s passing and pain in Gok’s uncompromising picture. It has a visual rigor, and representational courage and a discomforting amorality that is rare even in these nihilistic times.

I was kind of hoping that some sort of completely whacked out film like this would make it on our Decade’s Best list. But, as I sit here at home three-screening, with a doc on New York No Wave (Kill Yr Idols) playing in the background, I think the cultural gutter where Exhausted resides is a perhaps more glorious home for it.