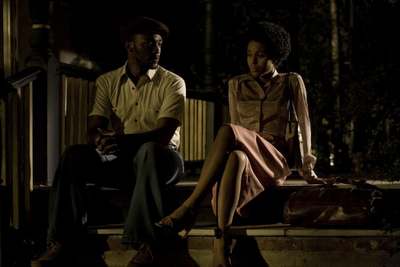 Producer Ron Simons has been blogging from Sundance about his trip there with his first film, Tanya Hamilton’s Night Catches Us. Scroll back through the blog for his earlier posts.

Night Catches Us has premiered!

The last two days have been a symphony of interviews and press meetings. The day of the premiere our PR firm (Fatdot — a great PR firm by the way!) shuffled Tanya (our director) and me off to TV interviews, photo shoots and a taping for the Sundance Channel, among others. We’d wanted to include my producing partner Sean Costello in these activities but all the day’s bookings only wanted to meet with the director and actors in the film (I play Carey in the film so there I was). Would have been really nice to have Sean there to speak about the film — he’s been involved in the project even longer than I have.

I never get tired of talking about the film, but I gotta say that back-to-back-to-back-to-back press meetings can really take it out of you. I got back to my place with every intention of taking a nap before we needed to leave for the premiere. Of course that 50 minutes got used up by ironing a shirt, chatting with friends who’d flown in for the premiere and scrambling some eggs.

As has been the case every day since we’ve been here, it was snowing heartily as we made our way to our premiere at the Racquet Club. I’d been informed by Sundance veterans that premiering at the Racquet Club (RC) during the opening weekend is a prized time/place for a premiere here. The RC is, as you might imagine, a sports facility that’s transformed into a 600+ stadium style seating theatre. The screen is huge and the sound system amazing.

Before we go into the theatre, filmmakers run a press line leading into the theatre. We are a small film and, unfortunately, both our lead actors (Kerry Washington and Anthony Mackie) are in Broadway shows (can’t get mad at them for continuing their successful careers) and could not attend the premiere. Press comes out to see, record and hobnob with stars. As such, we had a modest press line, though the ones who were there were enthusiastic about chatting with us about the film. Tanya, Sean, myself and Elliott Williams (another of our producers) chatted and joked with the press. As always, Tanya engaged the press with her incredible eloquence about the film with references to the encyclopedic knowledge gleaned from her research she’d undergone for the film.

Now into the screening theatre…

We four (along with our press reps) were among the last to enter the theatre walking from the back of the theatre along the right corridor to our reserved seats in the front. I kinda felt like the first string coming onto the field at the Superbowl. Even though I’ve seen version after version of our film during video editing, sound mixing and post color correct, this was to be the first time I’d seen the film with an audience. This is where the worlds of stage and film converge: both art forms require an audience to complete them. Only when the experience of acting and lighting and directing and editing and recording and casting meets the experience of a movie goer can the artform lift, inform, move or inspire.

It was when the opening credits were running that the delayed emotions which I had no time to experience before then, flooded my system. I literally felt my eyes swell and my throat expand as I thought: This is real. We’re here. We made it. Suddenly all the abrupt 4AM awakenings over how to wring another $5,000 out of the budget seemed worth it. It was then that all the arguments, discussions, disagreements and debates about how to make the film better seemed terribly logical. Right then every hour, every dollar, every pound gained (yes, I’m a stress eater) or lost (and sometimes I didn’t have time to eat) was a small sacrifice to get us to this here place.

Now of course we still have to complete our final sound mix and need to clear some footage and record the final score for the film, but we screened a film of which I am immensely proud.

The feedback was very positive from those who chose to stay and share their opinions. I was really quite surprised to see the vast majority of the audience stick around for the Q&A with us (these Sundance folk do indeed love them some movies!). The Q&A explored subjects from the inspiration for the film, to discussions about the politics of the film, to what we hope, if anything, people may learn from the film.

We left the premiere hungry and pumped. First stop: food. Next stop: after party. I didn’t even get stressed when the venue screwed up and told us they had to delay the party’s kickoff by an hour. We’d accomplished a herculean feat and, for once, I didn’t worry about the work that lay ahead the next day. I was actually able to enjoy being here with these immensely talented people who moved this film from concept to reality. Critiques and praises would come tomorrow, but that night was all about the celebration.

So to anybody who helped make this dream come true (and there are so so many) — I thank you and I salute you.

The next day (today), I woke up with the pride and sense of accomplishment still discernible as I walked to Main Street for my first interview of the day. The work begins again…