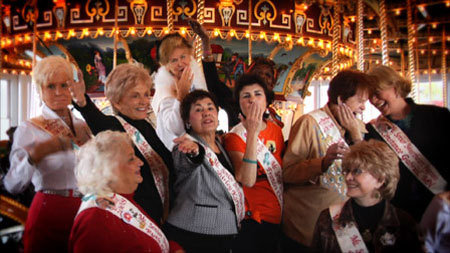 The “Keep Santa Cruz Weird” campaign in the northern California city that’s been host to the Santa Cruz Film Festival for nearly a dozen years now seems more than a cheap ploy to sell bumper stickers (though the one that read “You’re just jealous because the voices are talking to me” probably captures the essence of the place even better). It’s a serious – and controversial – plea to retain a way of life. For Santa Cruz is nothing if not, well, weird. So exotic, in fact, that SCFF should probably qualify as a foreign film festival showcasing American flicks – way too many in this cinephile’s opinion.

First a bit of film lore: The county of Santa Cruz extends to Scotts Valley, where in 1940 Hitchcock purchased Heart O’ The Mountain, his second home. (It’s now a private winery not open to the public, alas.) Nearby Capitola is where the incident that formed the basis of The Birds occurred. And rumor has it that the building housing the present-day Sunshine Villa “Assisted Living and Memory Care” – a short stroll from the Santa Cruz Boardwalk, a mini Coney Island with sea lions napping under the wharf – was the inspiration for the Bates Motel. (I walked by but didn’t venture inside to see what the grannies looked like.) And these are the more “normal” attractions in the area.

Indeed, the master of suspense surely wouldn’t recognize Santa Cruz today, which boasts an odd mix of old hippies, tattooed surfers, backpacking twenty-somethings (probably the target audience for the ConjureCon New Age expo that was being advertised) with a serious aversion to footwear – and yoga-loving soccer moms who arrived with the new Silicon Valley money. (The sleek, easy-to-navigate San Jose airport looks designed with Mark Zuckerberg in mind.) Used record(!) shops and bookstores (yup, at least one had a surfing section) compete with Urban Outfitters and American Apparel, and the smell of pot (medical marijuana is huge in Santa Cruz) mingles with the aroma of Starbucks lattes. And then there’s the elephant in the room – or more precisely, on the street – an entire population of aggressive transients, most seeming homeless by choice, that brings to mind 70s era NYC. And not the Studio 54 scene. (The line between eccentric and insane in California is dangerously blurred. Three days before I arrived, a mentally ill man from San Francisco stabbed a local business owner to death while she was on the way to her boutique – located mere blocks from SCFF’s two lovely art-house venues, the Del Mar Theatre and The Nickelodeon – on a Monday morning in what the papers were calling a “random act.” The only thing that shocked me was learning that this was the city’s first homicide of the year, that murder wasn’t actually an everyday occurrence.)

Though Santa Cruzans seem to take a view towards the actual crazies akin to the late Timothy Treadwell’s approach to bears (i.e., that they’re a part of the ecosystem that should be respected not controlled, that add character to the landscape – though every once in awhile you can expect one to turn on you), the film festival crew did their best to reassure paranoid New Yorkers like me that all was safe. And because SCFF is run mostly by a bunch of take-charge chicks willing to sacrifice sleep and sanity – not to mention money, as the event is an all-volunteer effort – to ensure that screenings start on time and that filmmakers feel like they’re part of a growing family, I truly wanted to rave about this fest. But when the credits roll a film festival will be judged on the quality of its cinematic experiences. Ah, there’s the rub.

So the bad reviews first. I should have known from the trailer by Kirby Scudder featuring local land artist Jim Denevan creating a giant version of the fest logo on the beach – an apt metaphor for film festivals in general, as the fruits of all that painstaking creative effort are washed away all too soon – that SCFF is popular with the flower power crowd. What I didn’t expect was the feeling of being thrown back to a different era – not time zone but time capsule – with SCFF’s crunchy left-wing programming. Which wouldn’t have been so off-putting had the majority of the movies been worth going back to the 60s for.

It wasn’t that I disliked Mary Liz Thomson’s Who Bombed Judi Bari? (edited using solar power) or Donald Goldmacher and Frances Causey’s Heist: Who Stole the American Dream? – which, though far too academic, was nicely balanced in its tracing of the birth and rise of the corporate oligarchy that now runs America, placing blame equally on both Democrats and Republicans for shamelessly allowing big oil and the big banks to make them their bitches. It’s just that by the end of the week I found myself praying for a panel called, “Who cares? Why Most Activist Doc-Making is as Liable to Change the World as Meet The Fockers.” There’s a fine line between “catering” to a paying audience and “pandering” to them. (Though I also wondered why not cast the net wider to include the surfing community, try to sell something like Marten Persiel’s This Ain’t California?) The constant chorus of “Right on, man!” in screening after screening only served to remind me that Santa Cruz moviegoers were having their backs patted rather than their brains challenged. Even Cloudburst – think Thelma and Louise reimagined as the story of an old lesbian couple fleeing to Canada to get married – the most recent offering from Canadian Thom Fitzgerald (a director who should know better), was nothing but an exercise in bowing down to the dyke community through cringe-worthy cracks about Rosie O’Donnell and K.D. Lang spouting from the mouths of Olympia Dukakis and Brenda Fricker (two actresses who should also be aiming higher). 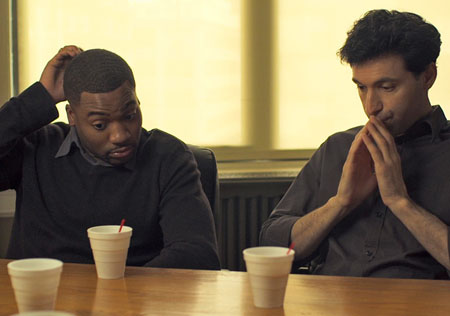 And now for the silver lining. Though this was the first year I didn’t cover Tribeca’s fest, I was lucky enough to catch one of its most buzzed about flicks in Santa Cruz. Supporting Characters is Daniel Schechter’s smart throwback to those laugh-out-loud, 90s indie comedies – complete with my fave actor from that time, Kevin Corrigan, alongside “it” folks of the moment Alex Karpovsky and Lena Dunham (in an actually tiny role) – that also managed to ring so painfully emotionally true. Understandably, the flick’s premise about co-editors attempting to simultaneously save a crappy movie while cleaning up their messy personal lives might not speak to those who don’t make or write about films for a (meager) living. Nevertheless, the fact that Supporting Characters screened to a mostly empty Del Mar house on an otherwise hopping Friday night was both disappointing and frustrating.

But my one true find was the closing night feature, Walter Matteson’s Pretty Old, a documentary that follows the nearly 35-year-old Ms. Senior Sweetheart Pageant in Fall River, Massachusetts (requirements are you have to be a woman “over 58 and alive”). Executive produced by Sarah Jessica Parker and Joe Berlinger, it’s a surprising look at ladies who view “superficial” beauty as a cause for celebration, an empowering declaration of “We’re still here!” (And the pageant itself as an annual communal experience.) Seguing back and forth between talking head interviews with the contestants, and behind-the-scenes footage from preproduction through show time, the doc at first feels like a pilot for a reality TV show (right down to a Betty Boop impersonator and the no-nonsense black woman) greatly in need of Errol Morris. But it soon turns into something so much weightier, a paradox of gravitas masked by skin-deep pursuits that sidesteps cliché at every turn.

For the ladies most full of life are often the worst off. A vivacious contestant with Tina Turner legs theorizes that tap dancing saved her life – only to later confess that she’s in fact dying of ovarian cancer. “I talk too much,” Ida, the token black woman, surmises while a guy chuckles loudly off screen. The camera pans to an older black man doubled over in laughter, soon identified as Tony, “Ida’s husband,” then right back to Ida who dryly offers, “Thanks, Tony,” and continues as if uninterrupted. Later we watch as the jolly Tony accidentally barges into another contestant’s hotel room – a woman who had earlier discussed her husband’s dying of Alzheimer’s – which then allows us to learn from that woman that Tony also has Alzheimer’s.

The stellar, award-worthy editing forces us to experience all the emotions of a lifetime within the span of a tight 87-minute cut. And Matteson, a protégé of Berlinger and Sinofsky, has a talent for listening, a gift that can’t be taught in any film school. Like Steve James or Heddy Honigmann, he gets people who shouldn’t be telling him anything to tell him everything, allowing for moments like the one in which a contestant reveals her first thought after her doctor told her she was having a massive heart attack. “Thank you, God, I’ve had a wonderful life,” she recollects with startling serenity. Jimmy Stewart himself must be smiling from above.