12 Tips on Networking from the Cannes Film Festival 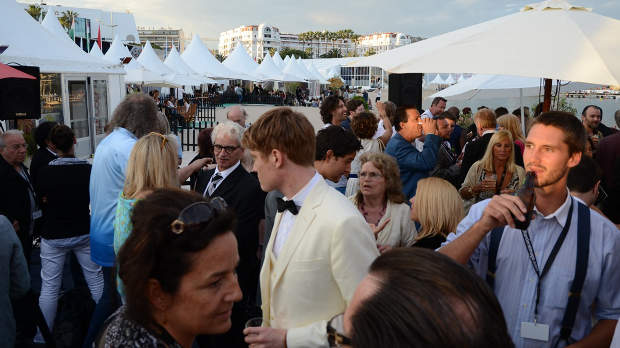 by Scott Macaulay
in Festivals & Events, Filmmaking, Financing
on May 30, 2012

While the concept of dropping into the world’s largest film event and competing with 999 other short filmmakers for the industry’s attention may seem like a Survivor-like TV show, it’s the reality each year for participants in Cannes’ Short Film Corner. Many of the filmmakers who screen their works in the basement of the Palais are arriving in Cannes for the first time, and the event is a crash course in networking and navigating the business side of film markets. “You can get lost in a sea of films,” admits filmmaker Bradley Montesi (pictured here with producer Elle LaMont), attending with his short Recess. “Everything is left up to you to do.”

Each year in Cannes I make a point to stroll through the Short Film Corner, check out some films and see who I meet. But, with 1,000 entries and many other things on my plate, I can’t be too systematic about that process. Last year I blogged a bit about the Short Film Corner and interviewed its director; this year I decided to compile a list of networking tips based on the interactions I had with the filmmakers I met there. Most of them were first-timers who managed to cut through the clutter of my Cannes-addled brain, made a connection and, in some instances, convinced me to watch their shorts. Here are notes from, and inspired by, these people, along with some wisdom from a couple of other people I met on the Croissette this year. Note: some of this advice is quite basic… but that doesn’t mean it’s not worth remembering.

1. Bring multiple ways to watch your film. It’s not enough to hand someone a postcard with your screening times on it. When you’re promoting a short, you’ll need to carry both DVD screeners as well as cards with password-protected Vimeo and YouTube links. Keep in mind the trend towards laptops, like the MacBook Air and (reportedly) the upcoming MacBook Pro, which come without DVD drives. These days, a streaming screener is a necessity. But how do you get people to accept a DVD or link?

2. Be social. “I believe that the only thing you can use to promote your short film is networking and personal charisma,” says Lithuanian-born director Ieva Javaityte, who attended the Short Film Corner with her film On Wednesdays. “I always had some screeners with me and where it was relevant, I shared them with professionals I met. I don’t believe that additional screening in the festival’s premises or things like that really help.” Filmmaker Arin Crumley, of Four-Eyed Monsters fame, attended Cannes this year to make connections for his next, in-progress feature. He describes his strategy: “My process has been talk my way into events I’m not on the list at, talk to people about what they’re looking for, and through my own insights and ideas, see if I can help them. And through that people are offering to help me. It’s been a big lesson in working together as a community.” What kind of things? “I’m based now at Sands Point Preserve in Long Island, and I described it to a producer who thought it’d be a perfect location for one of his projects. Then I told him what I’m working on and he said, ‘I have someone for you to meet.’”

3. Carry an iPad. In addition to DVDs and a Vimeo link, Montesi offered to show his film to people on the spot on his iPad. This strategy worked for him because of its length: only three minutes. “My iPad with a pair of over-ear headphones has been the most successful marketing tool (well, actually I guess it’s technically an exhibition tool) to get exposure for the film,” he says. “Being that it is so short, a lot of people are willing to sit there with me to watch it.” 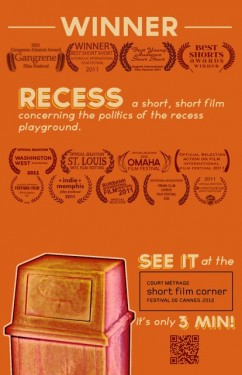 4. Carry an umbrella. It rained this year in Cannes — a lot. While standing in line at the Soixantieme Theater without my own umbrella, I was getting increasingly soaked until one filmmaker offered to share their large umbrella. We got to talking and I wound up taking away the filmmaker’s DVD.

5. Rest on your laurels. I’ve sometimes thought that crowding your marketing materials with festival laurels is a bit cheesy, but Montesi insists that the design strategy works. His film has been to 21 festivals, and, he says, “We weren’t trying to toot our own horn, but putting a lot of laurels on the poster helped get attention.” One other element: Montesi added a QR code to his poster that linked back directly to the film online.

6. Follow industry people on social media. Many industry people have Facebook and Twitter accounts, or blogs (and, in my case, a newsletter). Several people approached me via email or in Cannes this year after reading my call-out in the free Filmmaker weekly newsletter. One of them had a great strategy….

7. Offer to intern. One young filmmaker attended Cannes this year for the first time and sent me an email offering to intern while at the festival. Most independent producers I know don’t have the budget to bring much of a staff to Cannes, and an eager intern who has already made it to the fest could be a godsend. I didn’t take her up on it, but I was impressed enough by the approach to offer her some advice on attending the festival for the first time.

8. Craft your elevator pitch. Obvious advice, but it’s true. Once you get people to ask, “What’s your film about?” you need to have an answer. “It’s a faux sci-fi comedic drama about ice cream, birthdays, divorce and a memory-filled time machine,” rattled off Paul Trillo when I asked him about his short, Happy Birthday, Mr. Bracewell.

9. Bumrush panelists. Especially savvy and busy panelists expect this and plan their getaways beforehand, but, for the most part, you can collar panelists and make a quick introduction in those moments after a panel ends. One of the filmmakers whose short I watched this year introduced himself to me this way.

10. Reapproach people you’ve met before. When you walk up and introduce yourself to people cold, they have the upper hand. They can decide whether to engage or not, and they don’t owe you anything. But when you walk up to people you’ve met before, however briefly, and remind them of that earlier meeting, you stop them and put them on the spot. Or, at least, that’s how it works with me. I meet a lot of people, and a simple, “Hey, we met in the elevator at Tribeca” spurs my mental hard drive into action and invariably prompts my engagement. (If you haven’t met me before, don’t try this!)

11. Visit offices and gauge your reception. Industry vet Sydney Levine participates in a workshop the Cannes market stages for first-time producers. “It’s an introduction to the business,” she explains. “I take them on a walking tour of the market, and explain who that person is who just went by, how do you meet someone, and how do you find your sales agent. There are 15 participants per tour and I do three tours. They last about 90 minutes.” So how do you meet someone, and how do you find your sales agent? “Well, I tell them that there are 400 sales agents but probably only 20 fit their films. Filmmakers have to look at the action within their office [when they visit]. Are the people friendly to you? Can you get a card from whoever is in charge of acquisitions and production? Then they start to sharpen the focus of how they enter the market.” Jeffrey Travis, who attended the Short Film Corner with a short while shopping a feature in post, Dragon Days, describes his efforts: “I literally grabbed that market guidebook and made notes, going through the alphabet, walking to their booths and saying, ‘Hey, my name is Jeffrey Travis, I’m a filmmaker, I have a feature in post, and I have a two-minute trailer. Would you like to see it?” About half the time they’d say ‘yes,’ and out of that, some would say, ‘This probably isn’t for us,’ but a couple have been really positive. I think a lot of it is just developing a relationship.

12. Get inspired and be positive. When you get to a place like Cannes, chuck your indie film miserabilism and be positive. You’ll have a better time, and you’ll turn yourself into someone people want to talk to. Crumley may be known for hard-fought, deep-in-the-trenches DIY indie projects, but even he had to admit that Cannes is a blast. “Cannes is an amazingly cryptic maze,” he says, “but it’s inspiring. It’s a place where people really do care about film; you get the sense that this is the center of the world of the film industry. And, hanging out on these different yachts, it’s not as financially starving an industry as people like to [claim]. You see huge monetary resources. There is a real industry out there, and a lot of opportunities.”