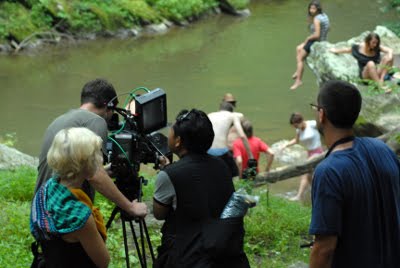 Baltimore director Matt Porterfield’s (Hamilton) latest film Putty Hill premieres this month at the Berlin Film Festival’s Forum. On the film’s nicely-done website, Porterfield describes coming up with a five-page treatment that would use 15 locations when financing for a larger project, Metal Gods, fell through. About the result, he writes:

Putty Hill is not quite like anything I’ve ever seen. On a most basic level, it is an amalgam of traditional forms of documentary and narrative realism. But it is an approach to realism in opposition to the anthropological, lyrical, and romantic currents present in most of the genre. More importantly, though the structure of the film was plotted, the details of individual scenes were largely improvised, breathing life into the dialogue and bringing an enhanced degree of naturalism to the relationships between characters. I had already established firm bonds with my cast working with them on Metal Gods, so they trusted me enough to take risks and bring a level of emotional honesty to the material that will resonate with audiences.

There’s a lot more on the site, including photos and behind-the-scenes video. The site also has a Kickstarter page that, with 11 days to go, has reached its goal of $10,000 to help defray post-production expenses and travel to Berlin. But, that number won’t cover it all, and monies are still being collected.

Below is the trailer for a film that’s synopsized like this:

A young man dies of a heroin overdose in an abandoned house in Baltimore. On the eve of his funeral, family and friends gather to commemorate his life. Their shared memories paint a portrait of a community hanging in the balance, skewed by poverty, city living, and a generational divide, united in their pursuit of a new American Dream