by Nicholas Rombes
in Columns, Filmmaking
on May 28, 2012

May 28
The Blue Velvet Project will resume with post #119 on May 30th. In the meantime, this is a re-post of the April 23 confession, with a new confessional update at the bottom of the post.

As author of The Blue Velvet Project—which owes a moral debt to the Dogme 95 movement, whose practice of constraint was an inspiration—I feel obligated to make this public statement of confessions regarding the rigors of the project. This is done in the spirit of Thomas Vinterberg’s confession regarding his film The Celebration.

Despite the fact that I promised Mr. Macaulay, Filmmaker Editor-in-Chief, that I would compose each entry “well ahead of time,” I confess that the following posts were composed the day of posting:

I confess to posting—out of unreasonable affection for the frame in question—on the same frame twice, concocting the flimsy ruse of “part 2” as a means to justify this selfish act.

I confess to the desire to “step frame” the DVD forward to avoid Jeffrey’s eyes being closed in post #73. However, I resisted this temptation.

I confess to knowing well ahead of time that I would use the Comolli and Narboni quote in post #25. In fact, no matter what frame post #25 would have revealed, I was prepared to use that quote, thereby jeopardizing the spirit of surprise and spontaneity that characterize the project.

I hereby declare that all previous Blue Velvet Project entries up to this point have been created following both the letter and the spirit of the agreement between myself and Mr. Macaulay, and that I will endeavor to remain faithful to this agreement for the remainder of the project.

Pleading for absolution, I remain

UPDATE, May 28: Backslider and deeply flawed person that I am, I have failed to remain faithful to the agreement. In fact, in the very post that followed my confession–post #106 on April 25–I quoted again from two authors I have over-used in this project, Brian Evenson and Haruki Murakami. I did this with full knowledge that, at the very beginning of the Blue Velvet Project in August 2011, I had promised its sponsor, Mr. Macaulay, that I would not quote from, cite, or reference the same author “more than three times.”

Knowing that Mr. Macaulay’s patience has its limits–and that those limits have been sorely tested–I accept full responsibility for this breach and vow not to mention Evenson/Murakami for the duration of this project. Furthermore, I accept the conditions of the letter I received (below; click to enlarge) from the Editorial Offices at Jay Street in Brooklyn, New York (as usual, on vintage stationery from the Hotel Nacional de Cuba) forbidding me from the use of certain letters of the alphabet in post #131, which will likely appear in July. 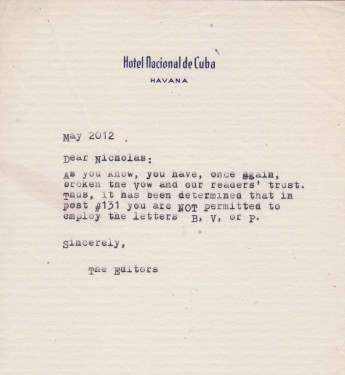