How We Financed When Harry Tries to Marry Through Staged Readings 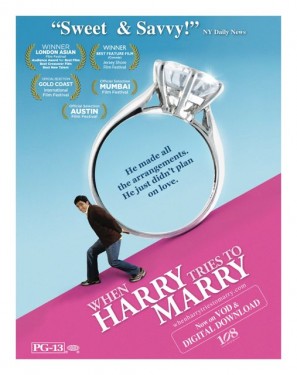 This blog is a result of a comment I posted on Scott’s article, 15 Steps to Take After You Finish Your Script.

People have always discouraged “readings” for investors, and I know why. They are usually boring for a number of reasons. Now I’ll lay out how my producing partners and I successfully raised money for our first film by staging readings.

First, here’s a little backstory on what led us to this idea that everyone tells you not to do. Our journey started in 1998 when my writing partner Ralph Stein and I first wrote the script for When Harry Tries to Marry. It was a passion project we knew we wanted to make ourselves. The script got immediate and positive reaction and scored us meetings around town. It got us hip-pocketed. We won some awards at writing contests. We even got “name” cast interested. I was accepted into the Sundance Producer’s Lab in 2004. We managed to raise a bit of financing, which eventually fell through. Then. Nothing. The script sat there for five years as life went on.

Cut to: March 2009. I had quit my job to turn to filmmaking full-time. My producing partner Sheetal Vyas and I created a very comprehensive, beautifully designed business plan, along with a full prospectus prepared by our entertainment attorney, a shooting schedule and a detailed budget. We made a list of people we could approach for funds and started sending out packages. The typical reply was, “I like the proposal, but I haven’t had a chance to read the script…”

We had to do something different. I met with Sheetal, Ralph and our co-producer Bhushan Thakkar. We reasoned that even if we could get investors to read the script on time and even if they liked it, we would face two big hurdles. I was a first-time director, and we had no cast in place. No stars. It would fall apart again.

I suggested we stage a reading: “Lets show them the movie, lets put on a show.” Friends in the business said, “Don’t do it. If someone walks out half way through, it ruins your chances with others in the room. And, what if no one shows up? It’s a waste of time.”

It was all conventional advice, but we figured, “What’s the worst that can happen? We’ll strike out with 20 or 30 potential investors?” Fine. At least we’ll know fast and can move on with life. So here’s what we did:

• Ralph and I started to rewrite the script to read like a play.
• I had begun a process of downloading about 100,000 stock images that helped me visualize the tone, locations, wardrobe in the movie for a “look book.”
• I created a mock soundtrack of music and songs I wanted in the film.
• We hired a casting director (Rita Powers) to put up notices and said we would directly audition ANYONE that wanted to come in. (We even put up casting notices on Craigslist.) We saw roughly 1,000 actors in ten days for various parts. These actors were told that we are doing a reading, and if we raised money, it would put them in contention for roles – no promises!
• There was one gigantic problem. We didn’t have Harry, the lead. Even though we were meeting quite a few actors for that part, no one really nailed it for me. I happened to be at an event and saw Rahul Rai dancing with a troupe as part of the evening’s entertainment. Rahul came in to read twice and nailed the part.
• Once we shortlisted the actors, we sat around a massive conference room at Ralph’s (day job) office, and did table reads. This is where we “optimized” the script for the stage. We removed a lot of description, and tried to eliminate as much narration as possible.
• We added an audio/visual element to the reading. Bhushan and I started editing a video montage with the images of the “look book.” We added music/sound effect cues to the montage. So when the actors read scenes, a plasma TV would display relevant images to add a “visual element,” such as reference pictures of locations, wardrobe, etc. To add some comedy, we even created some funny visual gags like what you see on The Colbert Report.
• This still wasn’t enough. We all felt that something was missing. Performances. It isn’t interesting to watch people reading from a script.
• Very quickly, I asked the actors to “get off page” and act out the scenes. We eventually found a balance where key scenes were “acted out,” while other scenes were “read” from the page. Luckily, the actors put in so much work that they had memorized their scenes for the most part.
• In the meantime, Sheetal called up every “black box” in NYC that had a seating capacity of 40 or more. We booked two afternoons for rehearsals and blocked out our script for the stage.
• Choosing a date and time for the reading was hard. We started asking potential invitees when they could come and everyone always had an excuse. We finally chose a Saturday afternoon and a Tuesday evening.
• I had met two comedians from L.A. who do sing-songs like Adam Sandler, and they whipped up a theme song for us: “There’s Something About Harry”, which we played at the start of our event and is now available on our soundtrack.
• We created a great giveaway that fit in a letter size envelope. A piece of red carpet on one side and something to the effect of “See you at the premiere” on the other side.
• We served wine, cheese, fruit, and refreshments.
• We had a photographer to take pictures.
• We borrowed a plasma TV and a sound system (that worked) for the background videos and music cues.
• We hired a graphic designer to create a great poster.

This was a proper event, like an Off-Off-Off-Broadway show, but it was in the heart of the Theater District in NYC. While this may sound like a process that took several months, all this was actually accomplished within a month or so.

Our first reading was nerve-wracking and exhilarating, but we did our best to entertain people, and gave them a “package” to consider investing in.

One potential investor who had flown in from St. Louis gave us a commitment for $50,000 as soon as the reading ended. The next morning, another investor handed us a check for another $50,000. We did a total of three such readings, which ultimately helped us to raise approximately $500,000. Money attracts money. It took us a few more months to find a set of investors to put up the balance of the budget.

One thing to note: we did not use a single dollar of investor money to finance any of this. We didn’t even cash any of the checks we had been accumulating for months until we had the funding benchmark we had set. Sort of like Kickstarter but offline.

This process had many benefits. Almost all the actors who contributed to the reading process found parts in the film, which we started shooting in October of that year. Grant Kretchik, one of our actors, is a professor of acting at Pace University, and he helped us partner with Pace for locations and so much more. Here is a video of that collaboration.

Moreover, when it came time to distribute our film, we thought slightly unconventionally. Here’s how we did that.

With Kickstarter, Indiegogo and other crowd-sourcing avenues, I think offline/online strategies like readings can immensely help filmmakers. They may not get your script “sold” or get you an “agent” or a “manager,” but they can certainly help you get your vision on screen.