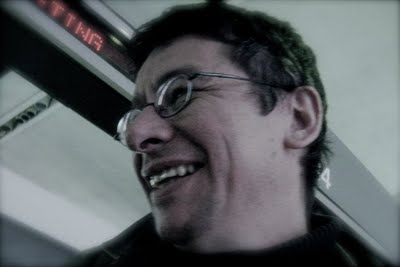 Of all the people I know — artists, musicians, filmmakers — who make dark, dark things, the French director Philippe Grandrieux is the sunniest. In person, he projects a passionate joy about his filmmaking craft, and the disturbing events contained within his films are not projections of surface-level angst or garden-variety emotional torment but rather philosophical inquiries into our relationship with Nature, our bodies, and our selves. To hear him talk about his work is to realize that he comes from a line that includes De Sade, Blanchot, and Bataille as well as later post-structuralists like Gilles Deleuze. (Grandrieux’s bloody work puts a different spin, in fact, on Deleuze’s concept of the “body without organs.”)

And then there’s the other side of Grandrieux’s work, one that, these days, is dominant. (In fact, my last paragraph’s fixation on physical violence is perhaps unfair, because after his debut film, Sombre, which is about a serial killer, the violence in Grandrieux’s later films, La Vie Nouvelle and Un Lac, has been growing more abstract and metaphoric in its presentation.) I’m speaking of demanding optics of his films, his interest in pushing the extremes of what is visible on the film screen. Sombre, which has what I can honestly say may be the best opening of any film ever, is photographed several stops under, and his latest, film, Un Lac, is also a literally dark film in which the projected image has the density of a sculptural object.

Here, at The Auteurs, is Glenn Kenny on the challenges of Grandrieux’s work:

The sure-to-be controversial centerpiece of sorts of this year’s Film Comment Selects screenings is a three-film retrospective comprising fiction features by French director Phillipe Grandrieux. So exacting and precise is Grandrieux with respect to the creation and projection of the cinematic image that he’s been known to try to have the exit lights in theaters blacked out at screenings where he’s in attendance. The immersion in total darkness is said to be particularly crucial to his latest picture, 2008’s Un lac. The Grandrieux immersion occurs on Wednesday, February 24—a separate admission triple feature of sorts. It seems that each of the director’s fiction films is less specific than the last in terms of time and place; Un lac is set in a forest in a territory somewhere in, we suppose, Europe…and features Russian actors speaking in heavily accented French. The film begins with its lead character, a young, rather pasty-faced young man, hacking away almost hysterically at something, with a tool of some sort. Given that Grandrieux’s Sombre, the first of the troika screening at the Walter Reade, is an unusually harrowing picture about a serial killer, one cannot be blamed for being a little relieved that the object being hacked away at by the boy is a tree.

After the hacking, the boy falls into an epileptic seizure that proves, among other things, to be a not-particularly-efficient way of making a snow angel. Later, a handsome, non-epileptic fellow happens along and announce that he’s here to “chop wood.” He’s also pretty attentive to the other young man’s sister, for whom the epileptic boy seems to have something like an incestuous attraction.

Does this sound like a compendium of old-school art-cinema commonplaces, or, to use a less nice word, clichés to you? I’m not trying to create that impression, honest. And for all that Grandrieux is one of the most critically revered filmmakers working today. I’ll tell you one thing: I can’t hazard even trying to render a verdict here. (Aside from saying that Grandrieux is obviously a deliberately difficult, demanding auteur.) One could counter that the “story” isn’t what Grandrieux is about; that with each successive film he has strove to make his imagery literally palpable, and that is finally what is important. But in order for the imagery to be palpable it has to be beautifully projected. (And another question: once the imagery is palpable, do the clichés of the “story” and “characters” become irrelevant? Or are they transcended?)

Here is a long and thoughtful interview with Grandrieux by Nicole Brenez. And make sure to check out his amazing website, which is an art object all its own. Grandrieux’s films screen beginning today at 4:00PM at Lincoln Center. For the open-minded, adventurous lovers of challenging cinema and, yes, dark, dark things, they are are recommended. Click here for more info.

(Above: Grandrieux photographed by me at Newark airport, 2001).