CARSON MELL AT THE SUNDANCE DIRECTORS LAB, PART ONE 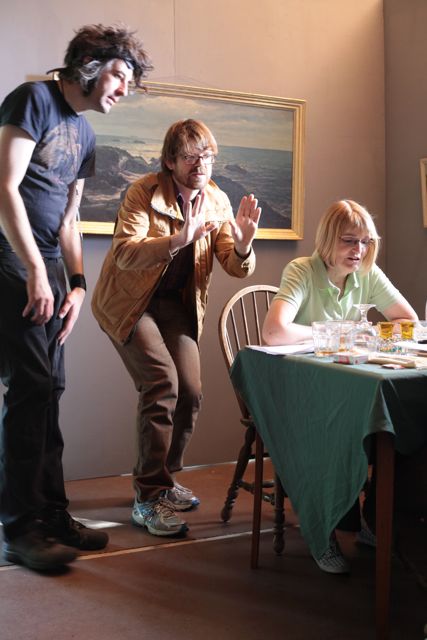 The Sundance June Directors Lab is underway, and blogging here at Filmmaker from the Sundance Resort in Utah will be two of the Lab’s filmmakers. First up, Carson Mell, attending with his dark comedy, Ajax, about “a band of alcoholic astronauts and a young woman adrift in outer space [who] become at odds with one another after discovering the purpose of their mysterious mission.”

I remember when I was first moving from a community college to a “legitimate” film/art school my dad told me that the best part about it would be how intimidated I would be by the other students’ work. “Same as when I went to art school, you’ll meet people who’re going to push you to keep up,” he said. And sadly, probably because most of us were in our early twenties or younger, there was a lack of intimidating work when I showed up. I dropped out after the first semester.

Now, showing up to the Sundance Directors lab, after seeing the work of the other fellows, I know the feeling he was talking about. Here are people who’ve made impressive work, and I feel like I’m going to have to work hard here to keep up. And I’ve heard other sentiments from other directing fellows. It’s a good feeling.

Most of my experience making films has been doing every single job on set and in post, splitting the jobs if I was co-directing something. So to me “directing” has always meant not only working with actors, but shooting, making props, dressing sets, editing, and craft services (AKA buying a big box of Cheez-Its snack packs and a flat of bottled waters for the trunk) On Friday and Saturday, all eight of the fellows shot the same scene, “Osso Bucco.” During my shoot, realizing that I was not in charge of resetting the props, keeping the picture in focus, booming, etc. was a great feeling. I always thought shooting with a crew would be much harder, but I quickly realized that all the help was going to make things a lot easier.

Saturday night we screened all eight scenes (the three-page scene, which begged interpretation, was fondly referred to as “Osso Bucco” here on the mountain because one of the lines referred to that dish) by the eight fellows, and I was again impressed and intimidated by my peers’ work. The scenes were shown without credits, and I took it as a great compliment that many of the fellows mistook Ionana Uricaru’s scene for my own. Her’s was hilarious.

Today, the actors who will be in my scenes showed up and talking to them and knowing that they were going to be performing the script I’d written was really inspiring and got me thinking about all kinds of new jokes that I could throw into the scenes. There is a hardworking and talented group of people working to build our sets and make our props. My movie is set in space with many strange props, and I honestly felt guilty about the work it would burden the crew with, but so far they’ve been really excited and positive about building the spaceship and making the props. If they’re lying to me about it, I appreciate it, and they’re good liars.

Tomorrow I start rehearsing for my first scene with my actors. Wednesday, I start shooting.