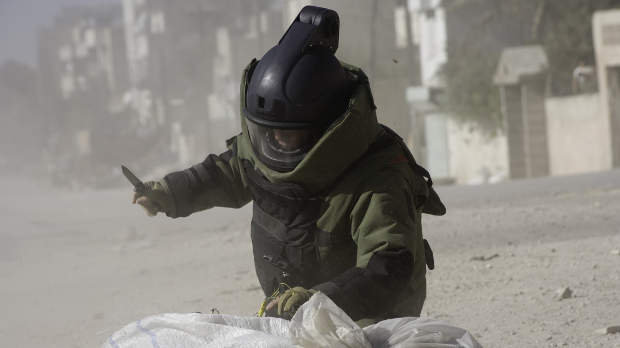 Cinematographer Barry Ackroyd has shot almost 50 features with numerous directors, but when it comes time to discuss his work on Kathryn Bigelow’s The Hurt Locker, his collaborations with two other helmers need to be referenced. The first is Ken Loach, the director Ackroyd is most associated with. The Manchester, England-born d.p. has shot many of Loach’s films, including Raining Stones, Ladybird Ladybird, Land and Freedom, the Palme d’Or-winning The Wind That Shakes the Barley, and his upcoming Looking for Eric. In these films he developed an unadorned, naturalistic camera and lighting style that gave them an almost doc-like verisimilitude. The other director is Paul Greengrass, whose movies also deliver the punch of real life but do so in different ways. Ackroyd shot Greengrass’s United 93, for which he was nominated for a BAFTA Best Cinematography Award, as well as his forthcoming Iraq-set thriller, Green Zone, which stars Matt Damon. Greengrass, who also directed the last two Bourne movies, is known for an electric, kinetic shooting and editing style that uses footage from multiple cameras mounted on all manner of rigs. Working with Bigelow on The Hurt Locker, Ackroyd drew on both approaches as he had to convey the realism of the film’s Iraq war setting while creating the material to accommodate the multiple perspectives required by Bigelow’s sophisticated approach to composition and montage.

“Kathryn and I had never worked together,” says Ackroyd. “We started out on this long journey, prepping in Jordan under quite difficult conditions. Our initial problem was that it was very hot, and the other problem was how to shoot a film like this on the budget [we had]. She wanted to use four cameras running simultaneously. We chose to shoot on Super 16mm, which might seem unusual for a Kathryn Bigelow film, but she was very happy to go with that choice. It offered financial freedom and liberated the cameras a bit. So we showed up with Aaton cameras and a crew from all over the world, and we wound up shooting quite a lot of Fuji film — over a million feet.”

Although he’s done two films with Greengrass, Ackroyd says that he considers his background in “the single-camera shooting process.” He continues, “Single camera and multi are both very valid ways of making films. Ken has a very classical discipline. You can walk onto the set with Ken and know one camera will be here and the second angle will be there. What Paul introduced with the Bourne movies was the modern style of endless multiple perspectives. Going into the film with Kathryn, I tried to bring that same kind of instant knowledge, which my background in documentary gave me: You just walk into a room and place your camera relative to the light and the camera. But then I also tried to give her those multiple perspectives in a free, documentary-like style but still lit in a beautiful way.”

In terms of the shots, Ackroyd says he and Bigelow were guided by the logic inherent in the work of a bomb-disposal team. “We would position the Humvee 150, 200 degrees away from the bomb, so there was a language to that perspective, and the second, third and fourth cameras followed that same logic. There has to be an integrity because the only way the editor gains is when you have the right shots. When I finally saw the film in Venice, Kathryn told me she could use every angle all the time.” He laughs, “I always believe that every frame of every shot I do is superb and should be in the film!”

With regards to lighting, Ackroyd says, “I have always worked on the premise, which comes from Ken Loach, that you light the scene, not each shot. You can still get beauty and a different look, and you get the added advantage of giving the actors space and [letting them run scenes] from beginning to end. I work from the inside out, not the outside in.” Explaining his specific approach to The Hurt Locker, Ackroyd said, “On daylight scenes I avoided lighting if I could. When it came to night, I would try and use a practical light as a source. I tried to avoid bringing too much technical equipment into a room. I used Chinese lanterns and Kino Flo tubes inserted into drainpipes. I cut out the central section and then you can diffuse the tube itself and stand them in corners. I like to disguise lights in that way. I’m always thinking about how to bring light into a scene without having to see it or have it interfere with the acting. [My approach] is about simplifying, not thinking too big and trusting the stock will carry.”

Of the stock, Ackroyd says, “I’m quite a fan of Fuji. I’ve used it over the last ten years, and we used it on Greengrass’s films. It is popular in Europe, and it has a quality that is slightly different than Kodak. It gives me the low levels. I shoot 500 ASA film, underexpose it a little bit, and I know the grain is going to be so much but not too much.”

When asked if audiences will be able to draw a connection between his work on The Hurt Locker and Green Zone, Ackroyd says that while the films are “very different,” his hand as an image-maker may be noticeable. “I’d like to think the audience will enjoy both films on their merits,” he says, “but if you are a cinematographer, you don’t want to repeat things, but you should have a signature. And that signature should carry on.”