by Jason Guerrasio
in Festivals & Events, Interviews
on Jan 30, 2009 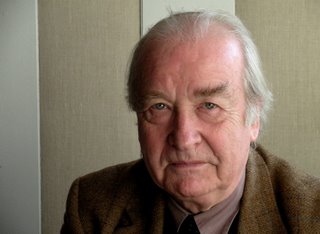 FILMMAKER: I probably know you best from your Kubrick book. What was that like, having the ability to interview him over the years?

CIMENT: Well, it came very naturally. I don’t know why. I think he had a piece of mine translated from 1968 — a long essay I did on the work of Kubrick. It was probably the first essay in France to try to show the strands of Kubrick’s work and the connections between all the films. People were always skeptical about the unity of his work; he was changing all the time, his style and form and so on. I was on the list of people he would approve to do interviews with on A Clockwork Orange. He liked what I did. He liked the interview. He liked the conversation. He would call me regularly for information on various things he wanted to know: Distribution in France, exhibition, technical things, people who could help him and so on. And then, I met him regularly — I was not a friend of his, I don’t think anybody was really friends with Kubrick — but he was not at all aloof, he was extremely charming. I found him one of the best people to interview, though of course it was a little intimidating because you’d have such a short time. But he was very professional. We’d talk quite a lot on the phone, that’s true. And then, I wrote this book in 1980. My wife said Kubrick called, he’d got the book. He called me back at 9 in the evening and said, “I received your book. It is the most beautiful book I have seen on a film director. I would like to order 400 copies, if you could get me a price.” There’s not much else to say, except of my fascination with Kubrick’s work. But it went on quite easily. I think he knew my book on Kazan; he was a great admirer of Kazan. I did a book with Joseph Losey; he knew Losey too, and Losey was a great fan of Kubrick. I think the fact that I was a professor — I was teaching at the university — I think he appreciated that. I think he was a little suspicious of the press in general. He’d had bad experiences: Interviews that had been published without his approval, or they’d say things that he didn’t really say. So I think the fact that I was a scholar, for him, it made him more respectful.

FILMMAKER: What makes Positif different from other film magazines?

CIMENT: Well, I think, first of all, it’s part of history now. It started in ’52, like Cahiers du Cinéma, in ’51 — two magazines with more than half a century of life. I think it’s also a magazine which has established a very strong relationship with directors, because I think they felt that we were not conditioned by ideology or by clannishness, and so on. It’s a magazine that is fueled by a love of cinema. We are not poseurs trying to be Maoist or structuralist. We really react with a passion for film. After that, of course, we exercise our intellectual curiosities to analyze the films. But before that, our first reaction is not to wonder how we’ll look if we like a certain film: Can we like American films while the Vietnam war is going on? Can we like this film which is telling a story when it is the end of the story in films? As Godard said, “We can’t tell stories anymore.” We have never been into this thing which makes magazines very popular among intellectual circles, because it’s always flattering to say, I am intolerant, or, I believe in this. We have never been — even if we are accused of eclecticism — we don’t care. What fuels us, again, is this love of cinema, curiosity, openness toward foreign cultures. The magazine was known in the ’50s for looking for new directors from Czechoslovakia, Poland, and later, in Brazil. The next issue is about new Belgian cinema. It is open to new forms and styles, and at the same time to study the past — to make connections between the past and present, commercial cinema and sometimes very peculiar types of cinema. As you can see in these selections (“Mavericks and Outsiders: Positif Celebrates American Cinema”), we have David Holzman’s Diary. We’re difficult to pigeonhole — it’s the freedom of the magazine that makes it difficult to pigeonhole. But I think on the whole, when you look back on 55 years of issues and articles, I think it has an image — an image due to the fact that several generations of critics live together at Positif; we don’t have one generation which kicks out the previous one. Young people come to Positif when they have read the magazine for 5 or 10 years, and they decide they want to write for this particular magazine because it has this kind of spirit, this kind of freedom. So, therefore, there is a sort of unity, due to…in spite of the 70 year-old critics and the 25 year-old critics — they belong to the same culture, though they are different, of course. The young people have their own ideas, a new vision of things, as do the older ones. It creates a rather unique experience.

CIMENT: I don’t know. We are pretty partial. We are partial on our own criteria. We are partial to our own individualism. We are not partial because of the trends. It’s true that we are, perhaps, unfair with some films while praising other films. But the case of Kubrick is a very interesting case. Truffaut was established immediately as a great director. But, I think he is not as great a director as Kubrick. However, Kubrick was despised and neglected by a lot of critics even in America — remember Sarris and Pauline Kael, how they reacted to 2001. So Positif was always a fan of Kubrick, as soon as Paths of Glory — which was dismissed by Godard. So Kubrick or John Boorman — I also wrote a book on Boorman — they are very much what we try to be as critics: They have not decided to be this type of filmmaker, a filmmaker with a signature that you can immediately recognize. It was much more difficult for Kubrick to be accepted as an artist than for Truffaut or Jacques Demy. Everybody loved Demy immediately — The Umbrellas of Cherbourg was immediately hailed. But The Shining or Full Metal Jacket or even till the end of his life — Eyes Wide Shut was dismissed. So that’s what we liked. We liked the freedom that he had. We try to, in our modest way, to behave the same, as critics.