by Nicholas Rombes
in Columns, Filmmaking
on Jul 4, 2012

1. This one from a montage that’s as expressionistic and compressed as anything in any of Lynch’s films. Having been strapped into the gurney and loaded into the circa 1960s ambulance in all its hallucinatory, candy apple red, hearse-like terror, Dorothy struggles against her bindings, screaming, “Hold me! I’m falling! I’m falling.” The frame captures Dorothy’s dream-terror as it slowly dissolves into a shot of the ambulance siren, a moment that is both horrifying and deadpan, as the dull wail of the siren lends a sort of flat, matter-of-factness to sequence.

2. From Charles Musser, Before the Nickelodeon: Edwin S. Porter and the Edison Manufacturing Company, University of California Press, 1991.

Two multishot films made early in 1901 are significant for yet another reason: they made use of a dissolve. In The Finish of Bridget McKeen, [Edwin S.] Porter dissolved between the main narrative gag in the kitchen and the tombstone gag. . . . The dissolve, a common screen technique developed in the mid nineteenth century, was executed by exhibitors during the course of projecting slides. It was considered a particularly elegant way to move from one image to the next, preventing sudden jumps when scenes changed.

3. The dissolve also allows for two spatial dimensions to exist on the screen simultaneously, something that’s difficult to achieve in other narrative arts, such as fiction, where if objects or events occur at the same time, our eyes can’t read both texts simultaneously, as in Mark Danielewski’s experimental novel Only Revolutions, whose narratives alternate 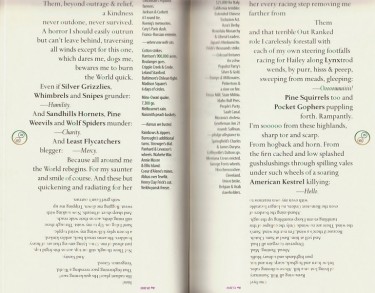 from Only Revolutions, by Mark Danielewski (2006)

between Sam and Hailey, their stories told on each page, one reading from top to bottom, the other reading in upside down text (requiring that the book be turned upside down) from bottom to top.

4. In “The Age of Light,” Man Ray wrote that from “the first gesture of a child pointing to an object and simply naming it, but with a world of intended meaning, to the developed mind that creates an image whose strangeness and reality stirs our subconscious to its inmost depths, the awakening of desire is the first step to participation and experience.” That combination of strangeness and realism is at the heart of this frame, grounded as it is in familiar images of the real world (an ambulance siren; a woman in a gurney) that are somehow made strange and unfamiliar by superimposition and the narrative context of Dorothy’s fit of madness. “The awakening of desire” not in Dorothy, but us.