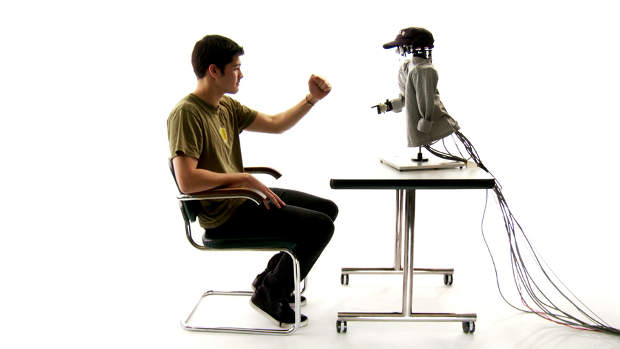 by Mary Anderson Casavant
in Issues, Reports
on Jul 19, 2012

Perhaps rather than taking a class on film theory, aspiring producer-to-be types ought to consider dropping in on Darwin 101. After all, the rules of the film industry and the natural world are one and the same: the animals who make it are those who learn to survive in any environment, which is why it should come as no surprise that when I suggested to Karol Martesko-Fenster that CINELAN, the Internet company he co-founded with Morgan Spurlock, had hit upon something new by finding a way to monetize short films on the Internet, he laughs a longtime carnivore’s laugh. “The short format has always been a way to generate revenue for creators,” Martesko-Fenster points out.  “It’s just that the kind of shorts that were making money were commercials, not films.”

One of the co-founders of Indiewire and the founding publisher of Filmmaker, Martesko-Fenster was the general manager of the film division at Babelgum, a free independent TV platform, when he and Spurlock co-founded CINELAN, an online publisher of nonfiction shorts. Unlike YouTube or Vimeo, it isn’t a platform for user-uploaded content. Instead, it commissions work by filmmakers it trusts and then actively seeks to get this work distributed across multiple platforms, including festivals, websites such as Hulu, and publications such as The Washington Post. CINELAN is currently working on packaging groups of shorts for two new platforms: VOD and pre-movie content at traditional first-run theaters.

While developing the site, Martesko-Fenster and Spurlock discovered that the average film viewing time online was 2.6 minutes. They promptly made it part of their manifesto that no CINELAN film would be longer than three minutes. Spurlock, director of Super Size Me and The Greatest Movie Ever Sold, sees the site’s bite-size content as a way to turn regular viewers into doc fans. “Anybody will give you three minutes, and once they watch those three minutes, 99 percent of people want to watch another,” he says. “It becomes like a potato chip. You don’t want just one.”

In its early years, CINELAN concentrated on building a brand, relying on well-known filmmakers such as Liz Mermin, Steve James and Jessica Yu to create great shorts that would attract potential partners to underwrite future projects. It’s a strategy that worked – in 2011, CINELAN announced that mega-cap corporation GE would be underwriting a series of 30 short films made around the themes of invention and innovation for a series called Focus Forward: Short Films, Big Ideas.

Martesko-Fenster recalls, “When we went to GE…we pitched them the idea of creating professional films specific to a brief that they would send out to filmmakers.” GE and CINELAN agreed upon the theme of “invention and innovation,” and the brief explained to filmmakers that the two companies were looking for films that would “highlight exceptional people and world-changing ideas that are impacting the course of human development for the better.”

Although it’s Focus Forward’s sponsor, for the most part, GE leaves the filmmaking up to the filmmakers. Once an idea is signed off on, the project grants the filmmakers complete editorial control, asking for nothing more than GE’s approved tag at the beginning and the end of the films. Making the deal even sweeter is that GE pays the filmmakers a substantial fee to license the shorts, but the filmmakers retain the rights to their own footage.

Spurlock points out that this type of sponsorship isn’t new: “Back in the early days of radio and TV, a company would come in to underwrite the production of [a show], and there was an alignment of ideology between consumers and who the brand thought were their consumers.” And what do the brands get in return? Says Spurlock, brands “want stories written about them.” It’s a model that Martesko-Fenster thinks will catch on. “Advertising is on the rocks, but what is never going to be on the rocks is a good film.”

Hoping to find the documentary stars of the future, Focus Forward announced a “filmmaker challenge” at Sundance this year, a contest open to anyone who can make a great short film following the same brief given to the 30 professional filmmakers. There’s a $100,000 top prize, and the top five filmmakers will be announced at Sundance 2013. (The submission deadline is August 23.) It’s no accident that the winners of the challenge will be announced at Park City. For both CINELAN and Focus Forward, festivals are a key part of their distribution strategy. Director of Content Strategy and Acquisitions Damon Smith (who’s also a Filmmaker contributing editor) says that festivals are great “launch pads” because they are a way “to generate a lot of press.” A mere five weeks after they debuted at Sundance this year, five short films produced by the project had been viewed 1.1 million times and then shared 3.5 million times.

Advice for filmmakers submitting to Focus Forward? Martesko-Fenster emphasizes the importance of making a film that is an “end-to-end story. It’s not a three-minute trailer. It’s actually a story within that timeframe.” And Smith reminds, “It’s important to maintain your voice and find a story that’s going to engage you and engage your passion so you feel like you’re doing for yourself and not simply fulfilling an assignment.” Listen up — these are the guys who got one of the world’s biggest corporations to believe in the power of independent filmmakers. “They used to say content is king,” says Martesko-Fenster, “and they finally realized it’s true.”