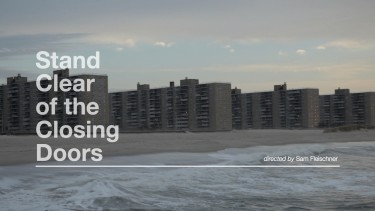 Up now on Filmmaker’s curated Kickstarter page is Stand Clear of the Closing Doors, the second feature from Sam Fleischner. The production is in the final days of its campaign and could use your help. What follows is a guest blog post from producer Veronica Nickel.

The next question in that cheer should be: how in the hell do we get what we want right now?

Sam Fleischner’s answer must be to assemble the best incognito team that you can find and get out and make your movie.

Undeterred by a false start last year, Sam aims to get his film Stand Clear of the Closing Doors off the ground and into production this fall. I came on board as the final piece of what seems to be a deft group of filmmakers. When first pitched the project, I realized that my job would be to support this pool of talent in order to pull off a shoot with a non-actor on the autism spectrum while riding on the subway for countless hours. Given that my first two features took place in the New Mexico high desert and Maine in the dead of winter, this seemed totally achievable.

As I started meeting the players, they struck me as the perfect components in the overall equation. Kate Oppenheim, Ari Kuschner, and Dave Saltzman of M ss ng P eces continually think of creative ways to approach their first collective feature as a company by using their extensive production knowledge and resources. From SeeThink, Andrew Neel’s infectious enthusiasm toward all things narrative is a creative godsend. And Sam, with a contemplative approach to storytelling that somehow contradicts the freewheeling ease of his visual voice and yet makes complete sense. Working with this diverse group of filmmakers only solidified my confidence that this film’s success was attainable.

Then came the hard sell. Well, as “hard” as it can be taking Sam’s tour of Rockaway. (Who knew that Venice Beach existed in New York?) As we walked, he pointed out all of the places that inspired the script. He also introduced me to some of the cast that he had already assembled. Rarely are you able to see a script come alive so early in the process. And we discussed our common belief in a holistic approach to making films at the mirco-budget level. This is where Sam’s soul surfer attitude really shines. Everyone on equal footing and taking care of each other because it is the right thing to do. I realized that it would be difficult, as it always is; wearing multiple hats and being pressed for time and money. But that the journey of making the project would be just as important as the end product.

He wants to make this film authentic to the experience of dealing with autism, again because it’s the right thing to do. You can see that in his Kickstarter appeal- **Final days**. It is evident in the countless hours of research that he has already done. And how he has tailored his naturalistic visual approach to ensures a certain level of comfort for a non-actor. Passion project does not even begin to express his commitment to telling the story of kids “on the spectrum”.

So, I bought it and here I am, making another low-budget film. Great team behind me and a solid vision in front. I guess that is how you get what you want when you want it.