by Michael Murie
in Cinematography, Filmmaking
on Jul 27, 2012

The Canon EOS M
Canon this week announced the Canon EOS M, a small camera that takes an APS-C sensor and stuffs it into a smaller body by doing away with the DSLR mirrorbox and using a new lens mount. The EOS M follows a trail blazed by Canon’s competitors — namely Panasonic and Sony. Sony has had a hit with their NEX- series cameras, and obviously Canon has been watching. 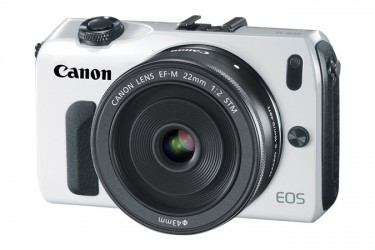 What does it mean for video?
Well for one thing, it does away with the mirrorbox, which for video shooters is a mostly useless piece of equipment. This shrinks the size of the body almost in half when compared to the Rebel T4i, the DSLR that has basically the same video performance as the EOS M. But does the camera offer anything else compared to the T4i? The sensor has the same resolution and the LCD has the same size and resolution as the T4i, and both feature the DIGIC 5 image processor, so video performance is going to be practically identical. One thing the EOS M does offer that’s not available with the T4i: continuous autofocus with subject tracking while in movie mode.

Canon is also releasing two EF-M mount lenses; a 22mm f/2.0 pancake lens, and an 18-55mm f/3.5-5.6 IS zoom. Spend another $199 and you can get an adapter that lets you attach regular Canon EOS lenses to the EOS M body. The adapter also lets the camera communicate with these lenses. If you already have some Canon lenses, this could be a big selling point; I have a Sony NEX-5 and I’ve used Canon lenses on it with an adapter, but those adapters don’t communicate with the Canon lenses.

For the past few releases, Canon has made only minor improvements in the video quality of their sub-$2,000 DSLRs. This is something that has been railed against by people like Andrew Reid at EOSHD.com, who, despite the name of his website, prefers the image quality produced by the Panasonic GH2 over Canon’s DSLR options.

Don’t agree? At the recent Zacuto Revenge of the Great Camera ShootOut, the GH2 rated close to cameras like the Sony F65 and Arri Alexa, while the Canon 7D was – mostly – voted to the back of the pack with the Apple iPhone. Admittedly, the 7D is an older camera, but the image quality of Canon’s DSLRs – the alising, moiré and rolling shutter – have barely changed.

If you were planning to buy a Canon T4i or 7D, the lighter, smaller EOS M might make sense. Though perhaps before we write off the Canon EOS M as just a T4i on a diet, we have to wait until we see some video.

The Canon EOS M is expected in mid-October.

Blackmagic Design Cinema Camera inches closer
The Blackmagic Digital Cinema Camera (BDCC) is supposed to start shipping by the end of the month. This is Blackmagic’s first foray into camera design, and it has attracted a lot of attention because of its 12-bit RAW capture options and reported 13 stops of dynamic range. It’s also priced at just under $3,000 and doesn’t have as large a sensor as the Super35 / APS-C cameras. It’s still larger than a ½-inch sensor, but it will make shallow depth of field a little harder to accomplish. The latest report is that there are issues with licensing, but that it should start shipping in the next couple of weeks.

Accessory makers have already announced several accessories
Switronix has announced the GP-DV-BMCC, a connector block that enables the connection of the Powerbase-70 battery pack to the BDCC. It can also be purchased with the battery as the PB70-BMCC. The pack should operate the camera for about four times the 90-minute operation of the internal battery. The PB70-BMCC has two p-tap ports to power additional on-board devices. 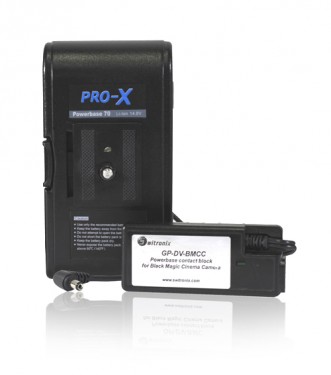 Shape is offering a handheld rig and a shoulder rig for the BDCC. They say they are taking pre-orders, but information on the website is still very sparse.
Shape: Blackmagic Series

Sony has a new camera
Finally, Sony just announced the PMW-200, which is being billed as the successor to the Sony EX-1. The EX-1 (and its update, the 1R) has been around for several years and is popular with corporate and documentary shooters. The PMW-200 has three half-inch CMOS sensors, the same sensor size as the EX-1. This is about half the size of the BDCC camera’s chip (which is about half the size of an APS-C sensor.) The body shape is slightly different to the EX-1, more closely resembling the recently released PMW-100. 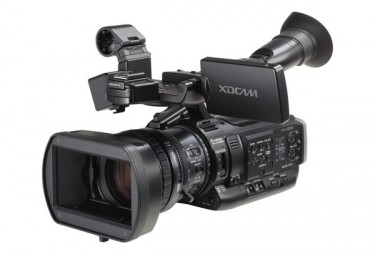 There are two interesting features of the camera; a Wi-Fi remote control (adapter required) and full HD 4:2:2 50Mbps recording, which is the holy grail for broadcast television because it’s the standard that the BBC requires for any footage.

The camera is expected to ship in September and the Wi-Fi remote control function will be a free firmware update in December. The camera will cost about $8,000. For the news and documentary crowd this camera will be worth checking out.

Interestingly, the PMW-100, which was released a few months ago, and also has 50 Mbps support, reportedly did not get the BBC stamp of approval. This was probably because it is a single sensor camera, rather than the three-chip PMW-200.
Sony PMW-200