by Nicholas Rombes
in Columns, Filmmaking
on Aug 3, 2012

In an unnervingly comic touch Frank approaches the closet where Jeffrey hides loaded up with his props, which include Dorothy’s blue velvet gown and his gas mask. He is the exterminator now, inhaling his chemicals, approaching Jeffrey and, ominously, the camera. For Frank has seen us, now. The invisible camera has been called out, hailed, interpolated. Frank stares back at us, returning our gaze, just as the bandit, gun in hand, did in Edwin S. Porter’s 1903 film The Great Train Robbery: 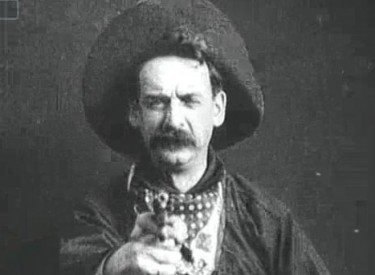 Out of the shadows he comes, Dorothy’s tortured, neck and wrist bound husband at his side like a soft wax museum figure from an imaginary film lightning-bolted from black-and-white into anamorphic Technicolor. In your dream, Frank is successful; he dispenses with Jeffrey, and then hunts down Detective Williams and Mrs. Williams (sparing Sandy), and, upon returning to Ben’s place, reloads his gun, stuffs his duffel bag with early Orbison-era cassette tapes and magic pills. He burns it to the ground, hops in his Charger, breaks Dorothy out of the hospital, cutting with scissors (the same scissors he used to snip off her husband’s ear) the IV tubes of some of the patients. He forces Dorothy to watch as he kills little Donny, the red sky above them exhausting itself with color, fusing into Dorothy’s mind as fixed idea, not blue but red, the United States of America spread out before them neither feminine nor masculine, unsexed, rising and falling against the blank horizon, her ear pressed against the inside window of the Charger as it speeds down the blacktop, her thoughts trailing out the cracked open window until there is nothing left for Frank to hurt.